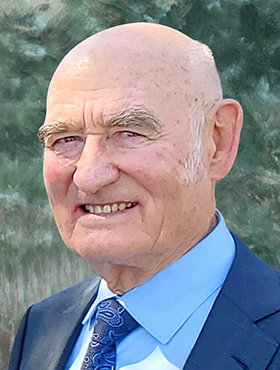 Brian James Davidson went to meet his Lord in the early morning of May 4th, 2020 in the city of Calgary, Alberta. Being the witty punster he was, he may have said that passing away in 2020 would give him clear vision to see Jesus.

BJ was born in Maple Creek, Saskatchewan in 1933. In the dustbowl of 1936, the only crop his father had was his brother Keith, so the family moved to Calgary. BJ grew up in Mission by the old Holy Cross hospital, swimming and fishing in the Elbow River. He attended Cliff Bungalow Elementary, Rideau Park Jr. High, and Western Canada High. A good Saskatchewan import, BJ considered himself a dyed-in-the-wool Calgarian.

Brian started his career at International Harvester in the parts department and then moved to sales. In 1955, he began a 43 year career as an independent Snap-On Tools rep, selling to many of the well-known shops like Finning, Kenworth, Consolidated Concrete, Shaw GMC, Standen’s, and others. He was the winner of many sales contests, and was the number one rep in Canada for two of those 43 years, often cracking the top 10 for the other years. Not all Canadians enjoyed the change to the metric system in 1977, but it allowed BJ to sell all the mechanics a second set of wrenches! Ever the example of consistent hard work, he sold tools by day, and managed inventory, did the books, and repaired tools by night. Many young men over the years learned the value of hard work by being employed and coached by Brian to help stock his truck, or work in the yard.

As a committed follower of Jesus Christ, Brian was consistently involved in church, which from 1973 was Bethany Chapel. For a period in the 1990s, he served as an elder there. Brian and Anne often demonstrated their gift of hospitality with a stream of people through their home over the years. Many people remember “progressive dinners”, warm meals, warmer hearts, and a sense that who was in the chairs mattered a great deal more than what was on the table.

Camp Okotoks, beloved by many kids of a few generations, was directed by BJ for one of the weeks for many summers in the late 1970s. BJ loved camp as it permitted kids some unhurried and enjoyable time to hear the good news of Jesus, perhaps for the first time. He enjoyed seeing that some kids were good at sports, some at scripture memory, and some at working hard.

He was known to family as “dad”, “JPaw” and “Uncle BJ”. He was hospitable and kind to all. He really enjoyed family saying that “Family is so good, it must be God’s idea”. After an evening of enjoying family or friends, Brian and Anne would often say “That’s one for the memory book”. Dad filled his memory book well. He led what scripture calls a “peaceful, quiet, godly life.” While we as family grieve his passing, we do not grieve as those without hope. We are persuaded to believe that he is with his living, loving, amazing Lord hearing, “Well done, my good and faithful servant.”

A Private Graveside Service will be held at Eden Brook Memorial Gardens. Condolences, memories and photos may be shared and viewed on Brian’s obituary at www.McInnisandHolloway.com.

Share Your Memory of
Brian "BJ"
Upload Your Memory View All Memories
Be the first to upload a memory!
Share A Memory
Send Flowers