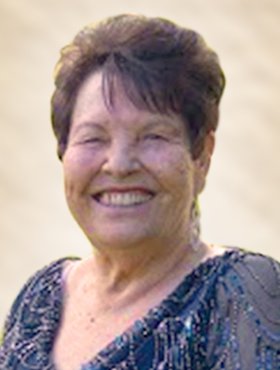 With great sadness and profound sorrow, we announce the passing of Amalia LoGullo; Wife, Mother, Nanna, Sister, Aunt, and Friend.
She passed away on Tuesday, May 5, 2020 at the age of 78 years.

Amalia was born in Rende (Roges) Cosenza Italy on October 7 1941, the youngest of four children. Amalia grew up on a farm outside of Roges living near her many aunts, uncles and cousins, with whom she had a very close relationship. Amalia was a natural-born nurturer and caregiver, taking care of her young nephews Joe and Ettore in Italy. She later opened her home in Calgary to Joe and his young family when they moved from Toronto to open a pizzeria.  She learned to cook at an early age and took great pride and joy in making her family’s favorite meals, especially for her grandchildren’s birthdays. Her lasagne, pasta & broccoli and macaroni were real treats and she loved to host lunches with her brothers-in-law and their families.

Amalia had a remarkably close bond with her father, who was her hero. When Amalia was the tender age of sixteen her father passed away and her world was shaken. Over the years Amalia spoke of her father with great fondness and named her only son Raffaele in his honour.

In November of 1959 Amalia was introduced to Francesco LoGullo, whom she married on January 24, 1960. They enjoyed over sixty years of marriage together. Amalia and Francesco came to Canada in May of 1960 and started their family in 1961 when they welcomed their first daughter Lina, followed by Raffaele in 1964 and Marisa in 1969. Amalia was the centre of her children’s lives and all things led back to Mamma. Lina’s Saturday shopping at Superstore, Marisa’s dinners and Raf’s coffee dates on Saturday afternoons will all be cherished memories in the hearts of her children.

Amalia had several jobs over the years, working mainly in the food industry, and always took pride in her work. In 1993 Amalia decided to retire in order to help raise her first grandchild Amelia, who was named after her. Later, Sofia was born, followed by Francesca and finally her grandson Vincenzo. It was clear to everyone that being ‘Nanna’ was Amalia’s favorite role, as she loved staying home and spoiling all her babies. Amalia took great joy in feeding, playing, and teasing all her grandchildren, who in turn adored her. At the end of every school year, Amalia would organize a trip to the nearby A&W to show her kids how proud she was of their accomplishments during the school year. Amalia’s significant presence in her grandchildren’s lives will be sorely missed. Her extended family included her other “children” Michelle, Sam, Norm and new grandson Jared, who always felt loved and included at every family gathering, whether in her kitchen, on the patio or at one of the many hotel rooms we found ourselves in over the cherished family trips around the world.

Amalia will forever be remembered for her infectious smile, lively sense of humor, amazing cooking, and unconditional love for everyone around her.

A small private ceremony will be held in Amalia’s memory for immediate family. A full memorial service for Amalia will be held at a later date, due to current restrictions. Condolences, memories and photos may be shared and viewed on Amalia’s obituary at www.McInnisandHolloway.com.

Share Your Memory of
Amalia (nee Dodaro)
Upload Your Memory View All Memories
Be the first to upload a memory!
Share A Memory