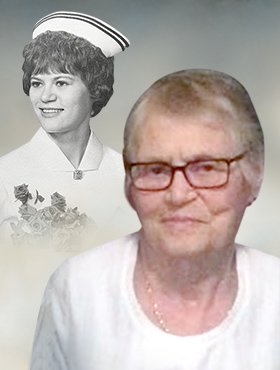 Linda Louise Alcock, beloved wife of Lorne Alcock, of Calgary, AB, passed away on Monday, May 4, 2020 at the age of 75 years.

Linda was born in Kelowna, B.C. The family moved to Trail B.C. shortly after, where Linda attended school until graduation. She moved to the Lower Mainland where she trained at Essondale in Coquitlam as a Psychiatric Nurse, then worked for several years at Woodlands School in New Westminster, B.C. During a family visit home to Trail, she met her future husband, Lorne. They dated while he went to school (BCIT), and then began work prospecting out-of-town. He proposed in 1967, and they married in 1968. By 1973, Linda had “retired” from nursing and they moved to Calgary for Lorne’s work.

Linda’s life was centered around raising our children and creating a home for the family. Kidney failure caught up with Linda in 1982, resulting in her having to go on dialysis. A kidney transplant in 1983 changed her life for the better, enabling her to fulfill those busy years of children’s softball, soccer, swimming, hockey, music, fencing, along with homework and help with reading. She always looked forward to the Brandel/Schleppe camping trips and her nursing buddy reunions.

With children grown, Linda worked for several additional years as a florist, where she enjoyed the social aspect as much as the work. Linda also spent many hours doing volunteer work, with the Kidney Foundation, as a Beaver Leader, and work with the brain injured.

Linda was an excellent cook, and liked to entertain. She loved to travel, with trips to Germany, Hawaii, a Caribbean cruise, and road trips to the American Southwest. Our final big trip was to Haida Gwaii in 2018 which she enjoyed immensely. She was a keen slots player, with multiple trips to Coeur d’Alene and Las Vegas. She was also active with the Calgary Rock and Lapidary Club. Linda and Lorne moved to a retirement villa in the beautiful community of Cochrane in 2014.

Linda was a pillar of strength throughout her life. She was always there for her family and friends, with unconditional love and support, even with kidney transplant concerns, multiple bouts of cancer, and many other health issues. Her love for life and will to fight remained to the very end.

A private viewing is planned for Friday, May 8, 2020. We plan to hold a Celebration of Life at a later date, with interment to follow.

Share Your Memory of
Linda
Upload Your Memory View All Memories
Be the first to upload a memory!
Share A Memory
Send Flowers