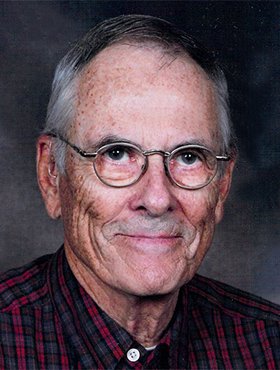 Patrick Joel Mylrea passed peacefully at Chinook Care Center in Calgary, Alberta on May 7, 2020 at the age of 82.

Pat’s father, Charles, opened a garage on Broadway Avenue in Saskatoon and this was the start of his keen mechanical skill which he honed throughout his entire life. Pat moved with his family to Kindersley, SK, where he attended McKenzie School till graduation. Pat was fortunate to meet Norma in Kindersley and they were eventually married there in 1958.

Pat worked in several accounting and financial roles in his career which took him, Norma and family to cities across Canada including St Johns, NB, Edmonton, AB and finally Calgary, AB where they set down permanent roots. Despite his occupation as an accountant, Pat’s real passion was for vehicles and aircraft of any kind.  He was especially proud to work for several air service and trucking organizations as it gave him the opportunity to be around big rigs, take a chance flight on an aeroplane, or see military and other unique aircraft from around the globe.

Pat was cheerful and affable and was universally recognized as a friendly guy with an eager sense of humour.  He enjoyed dancing (when the occasion presented), putzing in the garage, driving in the mountains, camping and perhaps more so, packing for camping, which seemed to be 85% of the fun for Pat. He loved his grandchildren dearly and enjoyed the companionship of dogs despite his allergies.  Pat could literally fix anything, and he spent a lifetime collecting bits and bobs that invariably were integral to the repair of a washer/furnace/vehicle or any number of unique problems.  If there was a need, he no doubt had the tool or a washer, bolt, screw, pin, spare part, or container that was perfect to make a permanent and skilled repair.  He passed on this “frugal ingenuity” to all three of his children in different ways.  Some of those jars of washers, bolts and tools reside in our garages and grandkids’ vehicles to this day.  If he did not have the right item tucked away, he relished the idea of going to the “wreckers” with his toolbox to dive in and find it. He knew cars, and he was always available to spitball a problem, boost a battery and he was not shy about telling you what lemons to avoid.  Before the days of cell phones and constant monitoring, Pat’s fingerless whistle was a legend in the neighbourhood. Its pitch could summon the kids home seemingly from miles away and everyone else then also knew it was time for supper or getting too dark.

In recent years Pat liked to be driven around so he could sip a hot coffee, read signs aloud, observe animals or scenery, occasionally whistle, comment on other people’s driving and gush about the vehicles he was being driven in: They were all new and shiny to him.  Pat’s humour and earnest banter will be greatly missed.

Pat lives on in the hearts and minds of his wife, Norma (Uzelman), his daughter and son-in-law, Lana and Ed Moskaluk; his son and daughter-in-law, Devin and Pam Mylrea; grandchildren, Mason and Nolan Moskaluk, and Blake and Holly Mylrea; his son-in-law Scott Parkinson; and was blessed with extended relations and friends all of whom he held dear.

A Celebration of Pat’s life is being postponed until that time when we can all gather safely together, family and friends, to have a proper celebration the way that he would have hoped we would. While we wait impatiently for those safer times, please make your condolences and tell us your stories about Pat through www.mcinnisandholloway.com.  Those moved to do so may make memorial tributes in Pat’s honour directly to The Calgary Humane Society, 4455 – 110th Avenue S.E., Calgary, AB, T2C 2T7, Telephone: (403)205-4455, www.calgaryhumane.ca.  or a charity of their choosing in support of dementia or Alzheimer’s support/research.

The family would like to extend their warm thanks and gratitude to doctors, nurses and staff at the Chinook Care Center who received Pat warmly, gave him joyful care and provided us, his family, with the sacred trust of peace of mind that Pat was in a bright and caring home to his very last day.

Share Your Memory of
Patrick (Pat)
Upload Your Memory View All Memories
Be the first to upload a memory!
Share A Memory
Send Flowers