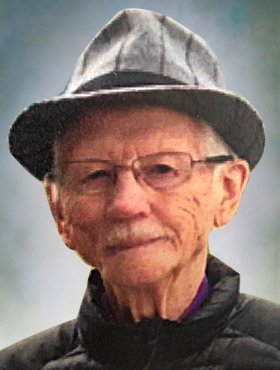 Reuben S Mantai, beloved husband of Irma Mantai of Calgary, AB, passed away peacefully on Saturday, May 9, 2020 at the age of 90 years.

Reuben was born in Biggar, SK, on August 13, 1929. In the spring of 1950, Reuben met Irma; she was a new neighbor and a relationship blossome. They were married October 26, 1951 in Swan River.They raised five children; four sons, and one daughter, Ray (Deb), Wayne (Bev), Doug (Brenda), Caroll (Rick) and Darcy (Kari). Reuben and Irma had seventeen grandchildren and at the time of his death they had thirty great-grandchildren. (One deceased)

Irma died on June 25, 2012. Dad missed her terribly and spoke of her fondly until the day he died.They were married sixty-one years.

Reuben was a cabinet maker and in 1965 started his own cabinet shop in Calgary.  He retired in 1996. Mantai Custom Cabinets is still going today- carried on by his son, Wayne.

He is united now with the God he loved and with his wife Irma. He is home.

Due to Covid-19 and the restrictions there will be a Graveside Service for the immediate family to be held on Wednesday, May 13 at 12:30 p.m. There will be a viewing at McINNIS & HOLLOWAY (Eastside, 5388 Memorial Drive NE, Calgary, AB) at 11:00  a.m.  Condolences, memories and photos may be shared and viewed on Reuben’s obituary at www.McInnisandHolloway.com.

We want to thank Dr Ahamed and the staff of Whitehorn Village Lodge for the wonderful care they provided. They were very loving to dad right up to the end. He was blessed to have lived there!

Share Your Memory of
Reuben
Upload Your Memory View All Memories
Be the first to upload a memory!
Share A Memory
Send Flowers