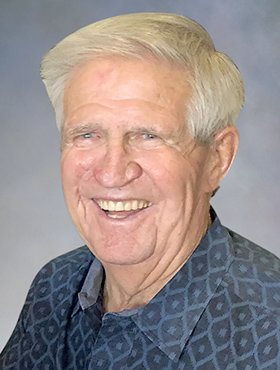 It is with the heaviest of hearts and the deepest sadness that the family of Michael John O’Flynn announces his passing on May 8, 2020, at the age of 85 years.

He will be lovingly remembered by his daughters, Debbie and Connie; his grandsons, Jordan and Michael; his brother Tom, and numerous close friends and extended family. He was predeceased by his wife Kay, his brother Bill, and sister Kathleen.

Mike was born August 15, 1934 in Viking, AB. He lived and worked throughout the province until meeting the girl of his dreams, and settling down in Calgary to raise his family. He began his career with Farm Electric and went on to work for SaskPower, and Ace Construction. He joined the City of Calgary Electric System as a Power Lineman, where he proudly spent the next thirty four years. Mike was most proud of the work he did with the Trouble Department and met many of his life-long friends there. He shared his vast knowledge of the line trade with apprentices, journeymen, and management alike, until his retirement in 1994.

Mike enjoyed spending time with his closest friend and hunting partner Bob Williams and his wife Mary Ann. He loved to winter in Yuma Arizona where he met his long-time friend and companion Annette. It gave him great joy to visit his “BC family” where he was able to fish to his heart’s content and everyone lovingly referred to him as Uncle Mike. He also looked forward to his daily routine of meeting up with his coffee buddies at the A&W. Mike loved spending time with his daughters and grandsons. Whether it was a quick beer at the pub, a graduation, or a birthday BBQ in his backyard, he cherished those moments the most.

Mike lived his entire life to the fullest and on his terms, never saying no to an adventure. He was an extremely proud and loving father and grandfather, and was always ready to lend a helping hand to family and friends.

He will be missed by all.

A Celebration of Michael’s Life is being postponed until a time when we can all gather safely together. Condolences, memories and photos may be shared and viewed on Michael’s obituary at www.McInnisandHolloway.com.If friends so desire, memorial tributes may be made directly to the Heart & Stroke Foundation of Alberta, 200, 119 – 14th Street N.W., Calgary, AB T2N 1Z6 Telephone: (403) 264-5549, www.heartandstroke.ca.