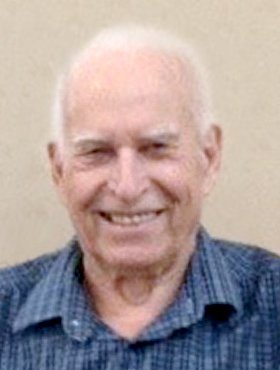 Lloyd was born in Tennant, California with his family moving back to Moosehorn, MB when he was still an infant. He grew up on the farm with five siblings, learning how to work hard while still having fun despite their not having much. After graduating high school in Moosehorn he went on to the University of Manitoba where he studied to become a Creamery Master. Shortly thereafter he joined the Air Force for approximately two years and learned to be an aircraft technician.  He worked on and learned to fly Harvard airplanes with these times being some of his favorite memories.

During this time he met Eleanor and they were married on Aug 23, 1947 and lived in Winnipeg. Their first son Ken was born there on August 7, 1948.  Shortly thereafter they moved to Flin Flon where Dad managed the Creamery. They later returned to Winnipeg where their daughter Marnie was born on April 7, 1951.

They both enjoyed being in Winnipeg close to Dad’s brother Bob and his wife Margaret and children Gerry & Cheryl. Margaret was Mom’s sister so the relationship between the two families was very close and many good times were had over the years.

Dad’s work with Manitoba Hydro took them to Brandon, MB sometime around 1957.  Their son David was born there on January 1, 1959.

In 1964 a special work opportunity arose for Dad through MB Hydro and the whole family moved to Trinidad in the West Indies. It was both an exciting and challenging opportunity creating many special memories.

In 1966 they moved to Selkirk, MB where Dad continued his career with Hydro. They spent the first year or so in Selkirk, then two years in Great Falls, MB.

In the late 60’s, they transferred back to Selkirk where they remained until 1978.  Dad was also town Counselor and the Mayor of Selkirk which kept him busy but he enjoyed it very much.

During those times in Selkirk many special memories and friendships were also made. All three children finished school and began their careers, followed by marriages and grandchildren.

In 1978 Dad’s final work transfer took them to Brandon. While they lived in a few places in Brandon their favorite was their acreage. It was Dad’s little farm where he enjoyed his tractor and training and raising Labradors.

He also enjoyed his hunting for many years be it birds, deer or moose and had wonderful stories from all of it. Those of us who had the pleasure of hunting or fishing with him have many great stories to share.

For decades Dad loved training and competing his Labrador retrievers which took him and Mom all across Canada and the USA making many great memories and friends along the way.

In retirement, Mom and Dad also had a place in Weslaco, Texas for a number of years, which they really enjoyed along with the many friends made there.

In 2001 they chose to move to Steinbach as Ken and David were living there. Shortly after this time symptoms of Mom’s memory challenges started to show. With their son’s work taking them away from Steinbach, Mom & Dad moved to Kelowna, B.C. for warmer winters and where Dad’s sister and family also lived. As health slowly declined for Mom they relocated to Calgary in 2009. Dad and Mom enjoyed the opportunity to see children, grandchildren and great-grandchildren more often.

He was predeceased by his wife Eleanor (2017), son Ken (2016), brother Robert, and sisters Eleanor and Mildred.

A private family service will be held at a later date. Condolences, memories and photos may be shared and viewed on Lloyd’s obituary at www.McInnisandHolloway.com. If friends so desire, in lieu of flowers, memorial tributes may be made directly to the The Alzheimer Society of Calgary, 800, 7015 MacLeod Trail S.W., Calgary AB. T2H 2K6, Telephone 403-290-0110,  www.alzheimercalgary.ca

The family would like to thank all of those who have provided care and support in recent years to Dad, all of the caregivers at Millrise Seniors Village, all the family in the area with a special thank you to Christina and Kerry-Lynn.