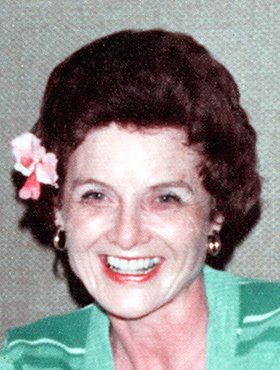 Barbara Deyell passed away at home surrounded by family on Tuesday, May 5, 2020. She was born and raised in Saskatoon, Saskatchewan, a city that left her with countless fond memories.  As a child, Barbara particularly enjoyed studying highland dancing at the Nellie Small Dance School. Years later, she was still captivated when someone performed the Highland Fling, Seann Triubhas, Sword Dance, or traditional Irish dances. She was also a tenor drummer in the Saskatoon Girls Pipe Band, which gave the opportunity to tour throughout Saskatchewan and Manitoba in the summer. A tenor drummer flourishing their drumsticks would always get her full attention and she was convinced that she never forgot how to do it.

Barbara was a natural caregiver, so it was not surprising that she trained as a nurse at St. Paul’s Hospital in Saskatoon, receiving her RN in 1947. She loved babies and chose to work in maternity after graduation. Later on, she switched to the Public Health Department where she continued to work with infants. She worked as a nurse for a short time after marrying and moving to Calgary, but what she wanted more than anything else was children of her own.  She possessed formidable maternal instincts, probably not all that different from those exhibited by mother grizzlies. She was also a gifted seamstress, taking up sewing under her grandmother’s supervision when she was only about six years old. Her sewing skills, combined with her love of shopping, meant that no item of clothing, formal or casual, was out of reach. She was quite willing to tackle anything from a formal gown to a figure skating dress or an Irish dancing outfit.  The pool table more often than not was covered with sewing patterns and fabric. She had limitless energy and would work well into the night. A perfectionist, she did not quit until she got it right. Her seams were never uneven.

Barbara was predeceased by her husband, The Honourable Roy V. Deyell and her parents, Stuart and Mattie Kendry. She was also predeceased by her son Bert Deyell, her granddaughter Madeline Hood and her brother Louis Kendry. She is survived by her son Brian Deyell and her daughter Colleen Hood, as well as her granddaughters, Amy Deyell and Kate Harris; and her grandson Andrew Hood. She is also survived by daughters-in-law Johanna Kwakernaak and Judy Bullis. Barbara had five great-grandchildren:  Sebastien, Rigby, Hudson, Ethan and Amelia.

At Barbara’s request, no service will be held. If friends so desire, memorial tributes may be made directly to the Roy V. Deyell Memorial Scholarship, Mount Royal University Development, 4825 Mount Royal Gate SW, Calgary, Alberta T3E 6K6. Condolences, memories and photos may be shared and viewed on Barbara’s obituary at www.McInnisandHolloway.com.

The family would like to thank Dr. Jennifer Kavalinas and Dr. Lourene Roode for the exceptional care Barbara received.