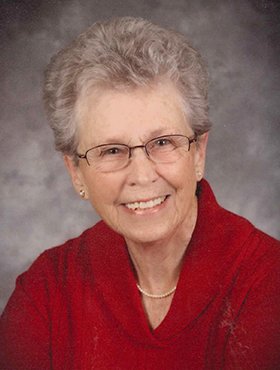 On Saturday May 16, 2020 BARBARA WILSON WHITE (nee READ) loving wife, mother, grandmother and great - grandmother passed away at the age of 92 years.

Barbara was born on July 14, 1927 in Valleyfield, Quebec. Barbara grew up in Valleyfield with her sister Judith and was raised by her dear mother and grandparents. As a teenager growing up during the war, one day at school, she met a handsome tall gentleman named Lloyd White from Huntingdon, Quebec. Barbara was a founding member of The Valleyfield Figure Skating Club a sport she loved her whole life. She was also an avid tennis player. She loved her lake where she taught many family members and neighbour's children how to swim. She went to work as a young teenager in Montreal to help support her mother. On August 19, 1950 Lloyd and Barbara were married and initially settled in Valleyfield. They were blessed with three children Ronald, Sandra and Wendy. The family eventually moved to NDG in Montreal and then settled in Pierrefonds, Quebec. Summers and eventually retirement were spent at their cottage in St Anicet surrounded by neighbours and friends that remain near and dear to this day. Lloyd and Barbara followed their two daughters west to Calgary, Alberta in 1997 where Barbara continued to live until her passing. Barbara embraced her community and met many friends through her church, her swimming and her multiple bridge clubs. Barbara was most proud of her children and family.

Barbara was predeceased by her loving husband Lloyd. She is survived by her sister Judith Curtis  (John) of Kelowna B.C., her son Ronald White (Sandra) of Marietta, South Carolina, her daughter Sandra White-Desramaux (John) of Georgetown, Ontario and her daughter Wendy White (Wayne Fisher) of Calgary, Alberta. Barbara was blessed with an extended family of seven grandchildren and five great-grandchildren that brought her tremendous joy.

Barbara leaves behind many sad hearts and we will miss her loving smile, generous heart and warm hugs but it was time for her to join Lloyd for a drink on the cottage deck admiring another beautiful sunset back in St. Anicet.

Due to the current situation, a celebration of her life will be held at a later date with her immediate family. Condolences, memories and photos may be shared and viewed on Barbara’s obituary at www.McInnisandHolloway.com.