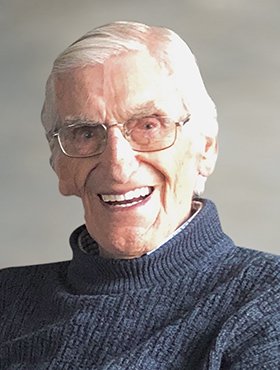 William was very proud of his service with the Canadian Armed Forces. He enlisted during WWII and saw active duty in the Korean War. He was very proud of his Scottish and German-Russian heritage. William was a very devoted husband, father and grandfather. Along with his immediate family, William’s sense of humour and wit was enjoyed by his extended family, friends and acquaintances.

William is survived by his beloved wife Jeannette of almost seventy years, his three sons, Larry (Laurie), Barry, and Richard (Georgia-Lee); his two daughters, Deborah (Barry) and Connie (Carmine); as well as his many beloved grandchildren and great-grandchildren. William is also survived by his brother Phil (Pat) and his sister Madeleine. William was predeceased by his daughter Gail, his parents, George and Sarah; and his brothers, Fred and Roy.

Rest In Peace Dad.
We love you and miss you.

As per William’s wishes, a private family Celebration of Life will be held in lieu of a formal service. Condolences, memories and photos may be shared and viewed on William’s obituary at www.McInnisandHolloway.com.

The family would like to say thank you to all the staff at Seasons High River for the care given to their beloved father during his residence there. As well, the family would like to extend sincere gratitude to the medical team and all staff at the South Health Campus for their wonderful care and compassion shown to their father and his family during his brief time there.

Share Your Memory of
William
Upload Your Memory View All Memories
Be the first to upload a memory!