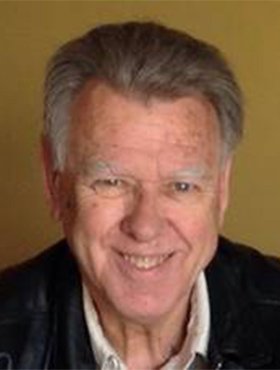 Dad joined the military at a young age and was stationed in Germany during peacetime. He was then stationed in Calgary where he met Joan in 1954 at the Avenue Ballroom. He knew instantly that she was the woman for him and they were married six months later. Dad was determined to celebrate his 65th anniversary with Joan, and together they reached that goal on April 9, 2020.

Roland has been the most amazing husband for sixty-five years to the love of his life. She was the centre of his world and everything he did was for her and his family. They had a large family of five children, eleven grandchildren and four great-grandchildren.

Although dad’s military time was short, he always had so much pride in having been enlisted and told many stories about his time in the military.  Dad then became a printer and was equally proud of his craft. He made some great friends through his jobs whose friendships continued for many years.

Dad’s morals, ethics and honesty were next to none, and he was the role model that led us all. He loved sharing all of his children’s accomplishments and spoke about them endlessly to whoever would listen.

His passion for volunteering led us all to be involved at Thorncliffe Community Centre. He was one of the founding committee members who helped make the community and arena what it is today. We all have great memories of our time there.

Dad had a positive impact on many kids through the community and that legacy will never go away. He volunteered with minor hockey for many years and was most proud of his time volunteering with the 1988 Winter Olympics in Calgary.

Dad woke up every day happy and we will miss him for this happiness, his constant smile, his whistling and his refusal to leave the door without waving until our car was out of sight. Love you Dad.

Share Your Memory of
Roland
Upload Your Memory View All Memories
Be the first to upload a memory!
Share A Memory
Send Flowers