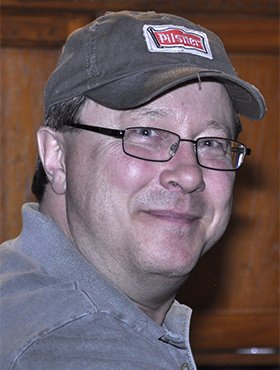 David Becker, beloved husband of Janet Becker of Calgary, AB, passed away on Thursday, May 21, 2020 at the age of 59 years.

David grew up in Lethbridge, graduating at the top of his class at LCI in 1978.  In fact, David was known to argue his test answers with his Science or Physics teachers, and be right.  After attending Lethbridge Community College, he moved to Calgary to complete his education at SAIT.  Upon graduation, he was quickly offered a job at Trans Alta in Calgary. Being laid off during a recession led to employment at Bow Networks as a software developer.  Bow was bought by RuggedCom and they in turn, were bought by Siemens Canada.  David was valued wherever he worked.  In the words of a colleague, “Dave was such a cornerstone for us; dedicated, methodical and hardworking, and always willing to mentor and help.  Each of us owes Dave for the part he played in our careers.  He was universally loved and respected and will be greatly missed”.

David spent a lot of his leisure time outdoors, often around a campfire with a Pilsner in hand. He was known for his clever sense of humor, gadget and flashlight collections, and for his eclectic array of tee shirts, many of which came from his wife’s travels while he enjoyed staying at home.

David always looked forward to the annual camping get-togethers with his high school friends at Waterton, Rollingsons, Kimberley, and Nakusp.   Despite time and distance, David remained steadfastly loyal to his family and friends and he will be dearly missed.

There will be a celebration of life later this summer in Lethbridge when restrictions have been lifted. Condolences, memories and photos may be shared and viewed on David’s obituary at www.McInnisandHolloway.com.

David’s families would like to thank the chemotherapy, radiation and stem cell transplant doctors and staff of the Tom Baker Cancer Centre and Foothills Medical Centre, the staff at AHS for wound care, the staff at Home Care, Respiratory Therapy and Palliative Care, the staff and doctor from Medical Assistance in Dying, the staff from EMS and Carewell Pharmacy.  A special thanks to Key Seismic Solutions for supporting Janet so that she could be home for David’s remaining days.