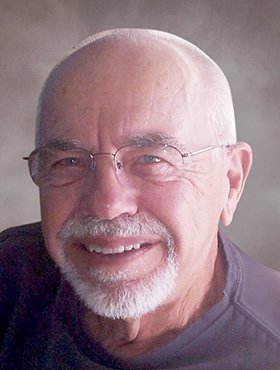 Robert (Bob) Leslie Clarke, beloved husband of Carmen Marie Clarke (nee Hines)  of Cochrane, AB, passed away on Tuesday, May 19, 2020 at the age of 84 years.

Bob was born on February 11, 1936 in Assiniboia, SK. He grew up in the Vulcan and Brooks area before joining the Royal Canadian Air Force at age 17 and became an electronics engineer.  Bob was stationed in Resolute Bay, NU; Clinton, ON, (where he met and married Carmen); Comox, BC; Bistroff, France; and Gimili, MB.  Bob retired from the RCAF in 1966 and went to work at Geophysical Services Incorporated (Texas Instruments) where he remained until 1995 when he was forced into early retirement.

Not one to sit around, Bob and Carmen bought a lot in Kaslo, BC, and built their own house where they enjoyed life with good friends and neighbours until they decided to downsize and became snowbirds for ten years.

Bob was diagnosed with Frontal Lobe Dementia and Alzheimers in 2015, and even though he was ravaged by both diseases, he still liked to “sparkle” for the ladies and always kept his wonderful sense of humor.

Bob is survived by his wife of sixty-two years, Carmen, daughters, Kimberley Clarke of Cochrane, AB, Tracey Kennedy (David) of Pilot Point, TX, Leslie Pearson (Mike) of Carrollton, TX; grandsons, Kevin Koestler, Robert Kennedy; and granddaughter Hannah Kennedy; as well as numerous other relatives. A brilliant and talented man, Bob will be forever missed by everyone who knew him.

At Bob’s request and in consideration of the current pandemic, no service will be held.  If friends so desire, in lieu of flowers, memorial tributes may be made directly to the Alzheimer Society of Canada, 20 Eglinton Ave W., 16th Floor, Toronto, ON M4R 1K8, Telephone: 1-800-616-8816, www.alzheimer.ca. Condolences, memories and photos may be shared and viewed on Bob’s obituary at www.McInnisandHolloway.com.

Thank you to the staff at Points West Living and the Bethany Care Centre in Cochrane for keeping Bob comfortable and safe during the pandemic.