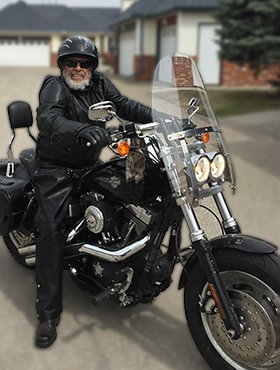 It is with profound sadness that we announce the passing of Keith Stirling on Sunday, May 24, 2020 at the age of 81 years.

Keith was a beloved husband, father, grandfather, uncle, brother-in-law and friend.  The youngest of three sons, born in Assiniboia, SK in February 1939 to Tom and Eileen Stirling. Keith graduated Grade twelve at Crescent Heights in Calgary and from there went on to work for Royalite Oil for a few years.  He then changed careers to become a life underwriter in the insurance industry. He worked at National Life and then Empire Life for a time. Always interested in higher learning, Keith achieved his CLU, CFP and ChFC.  In 2000, he established Stirling Financial Services. He remained in the industry until his retirement in 2010.

Keith was always a life of the party with all of his many friends and family.  He loved to go to the Legion Meat Draw with his friends and brothers, play cards and garden. His wine making became quite a source of pride with him. Keith’s other talent was his cooking!  He was pretty famous for his oyster chicken wings, BBQ ribs, devilled eggs, dill pickles and gourmet meals that are too numerous to mention. He enjoyed so many years of family get togethers, and mostly camping. Keith was by far and away the best at fire building and he transferred those talents to both his grandsons. You won’t find either Dylan or Jared with a small fire. Pam introduced her dad to Bluegrass music a number of years ago and it became one of his great loves! He could name all of the members of any group we had ever seen perform and through the years would also update Terri on who had switched to playing Dobro or guitar for another group. It was fun to see how long the Blue Grass station would last in the truck when taking Jared and Jayda to games. It usually got changed fairly quickly!!

At the age of 72, Keith made up his mind that he was going to learn to ride T.J.’s Harley. He attended Too Cool Motorcycle School. It was a challenge but he pursued it and did great. He enjoyed many hours riding the Harley, as recently as just last week. He always said that T.J. rode with him. Keith and Terri were fortunate to do a bit of travelling. Their most loved trip was a fourteen day tour of Newfoundland. Keith would have gone back every year if he could.  He loved the people and the music. Keith was so proud of all his grandchildren. Many memorable weekends were spent camping with Dylan when he was young, and more recently spending time at Dylan’s business where he would ask many, many  questions as he was very intrigued at the precision machining process and Dylan’s talent and expertise. Keith spent many hours being the hockey and soccer Grandpa to Jared and Jayda. He was so proud of them and loved every minute of his involvement in their lives. Anyone who was at a game could attest to Grandpa Stirling cheering the very loudest!  Jayda has become the  most amazing and gifted dancer among her other talents. You could glance over at Grandpa during any of her dances, and you could see the tears in his eyes. Having little Grace come into his life was a blessing, and he could often be found laying full out on the floor playing Jenga or some other board game - just Grace and her Grampa Gooey.

Keith is also survived by many sisters and brothers-in-law, Joan (Art d.), Dave (Amabelle), Mimi (Gerry d.), Paul, Maddie (Hal), Joe (Eunice), and Cathy (Barry), as well as numerous nieces, nephews and friends. Also surviving are numerous Stirling nieces and nephews who are so special to him.  They in turn loved him tons and knew he was a very special uncle.

Keith was larger than life in so many ways!  Anyone who met him loved him and never forgot him.  He’s in a happy place now with lots of friends and family and, most of all, with TJ and Laurie.

Due to COVID 19 protocols we are unable to have a full funeral service at this time. However, McInnis and Holloway Chapel of the Bells is able to provide for an intimate viewing capability.

Up to 15 people may pass through the viewing room at any given time and up to 50 people are allowed to be congregated in the outdoor parking area awaiting their turn to pass into the viewing area, while considering physical distancing of 6 feet.

Keith is to be cremated and an interment memorial will be scheduled at an appropriate time in the future.

Condolences, memories and photos may be shared and viewed on Keith’s obituary at www.McInnisandHolloway.com. The family will also be sharing the obituary on Facebook.