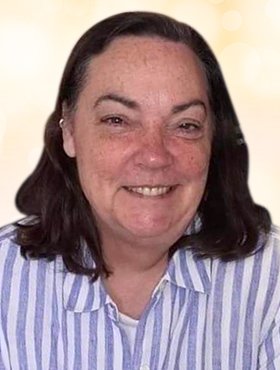 Nancy Hawthorne, beloved wife of John Hawthorne, was taken from this world much too early after a brief battle with metastatic lung cancer, on Monday, May 25, 2020.

Nancy was loved by all who knew her, both in Canada and in Ireland, where she became a citizen. Nancy was born in Edmonton, AB, and moved to Calgary in 1967. Nancy graduated with honors in 1988 from the University of Calgary with a B. A. in Political Science. She worked for Canada Northwest Energy, and TransCanada Pipelines before heading off on a walking tour of Ireland in 1997. She met John in Galway shortly afterwards, and they were inseparable from that moment until her passing on Monday. Nancy decided to stay in Ireland with John, and she built a career with ETP (Ireland) Ltd. as a senior project management consultant. They came to Canada in 1999 to get married in Banff. John liked Canada so much that they decided to move here in 2002. Nancy and John lived in Winnipeg for three years, then moved to Calgary, where Nancy worked for the Petroleum Society of CIM as both the editor of the Journal of Canadian Petroleum Technology and office manager for four years. She then returned to her first love of the oil patch, and worked as a project scheduler for Three Streams Engineering, and then Trans-Northern Pipelines Inc., where she was employed until her cancer forced her to go on medical leave.

No one could meet Nancy and not love her. She had a heart of gold, and would do anything for her family and friends.  Her infectious smile and frequent laughter are what we will remember the most about her. Nancy loved dogs, especially bulldogs and greyhounds. She and John owned a racing greyhound in Ireland, which they named Nancy’s Joy. She also loved doing jigsaw puzzles, reading mystery novels, and spending time with her extended network of friends and family.

A private funeral mass will be held for Nancy at a later date. Messages of condolence may be forwarded to the family at www.McInnisandHolloway.com.

The family would like to thank Dr. Gwyn Bebb, his nurse Kate, and the rest of the team at the Tom Baker Cancer Centre for their amazing care of Nancy during her illness. If friends so desire, in lieu of flowers memorial tributes may be made directly to the Alberta Cancer Foundation, c/o Tom Baker Cancer Centre, 1331 - 29 Street N.W., Calgary, AB T2N 4N2 Telephone: 1 (866) 412-4222.  www.albertacancer.ca/memorial.

Share Your Memory of
Nancy
Upload Your Memory View All Memories
Be the first to upload a memory!
Share A Memory
Send Flowers