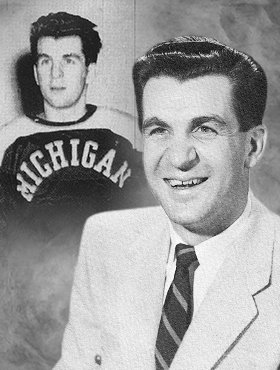 Walter Gacek, beloved husband of, Frances Gacek (nee Borek) of Calgary, AB, passed away on Wednesday, May 27, 2020 at the age of 93 years.

Walter was born in Winnipeg, MB on June 26, 1926 where he received his early education. After one year at the University of Manitoba, Wally attended the University of Michigan on a hockey scholarship where he received his Bachelor of Science and a Masters’ Degree in Petroleum Geology.  Wally was nominated as an All American in 1948 and 1949, to the all time Michigan All-Star team for the past fifty years and the Michigan Hall of Honor in 2006.

After graduation Wally worked for Gulf Oil for thirty-five years achieving the position of Exploration Manager. He worked in Stettler, Pittsburgh, Red Deer and Calgary.  After taking early retirement at the age of sixty, Wally worked for Canada North Energy as V.P. of Exploration for three years, which involved travelling to Europe and Asia.

Wally is survived by his loving wife, Frankie of sixty-four years; his children, Linda (Steve), Matt (Ursula) and Lori (Lee); sisters-in-law, Judy Gacek of Winnipeg, Rosella Borek of Dawson Creek and Elizabeth Borek of Victoria; and many nieces and nephews.

He had a great sense of humour and quick wit. Wally enjoyed golfing with is friends at Earl Grey, gardening and assisted Frankie with her farming operation. Family was very important to Wally. Wally, Frankie and family attended most wedding and anniversary celebrations in Winnipeg, Stettler and Dawson Creek. Of all the activities Wally enjoyed going to dinner with his family and the celebrations at Christmas, Easter, Thanksgiving and birthdays. Vacations at Winnipeg Beach, Hawaii, Palm Desert and Europe, also cruising to the Caribbean, Mediterranean, Panama Canal and Alaska.

As per Wally’s wishes, there will not be a memorial service.

Condolences, memories and photos may be shared and viewed on Wally’s obituary at www.McInnisandHolloway.com.   If friends so desire, memorial tributes may be made directly to the charity of the donor’s choice.

The family would like to thank Dr. I Khosla, Nirmal, Andrea and Dr. Sharma at the Cardiac Clinic and the staff at United Active Living for the excellent care he received.