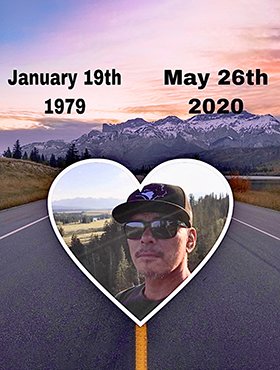 Tony was born on January 19, 1979 to Walter and Alma Brandon in Brandon, Manitoba.  After his parents died, he was raised in Waywayseecappo, but his family roots are Sioux Valley.  He moved from Manitoba when he was 18 and called Alberta his home.  He was living in Edmonton when he met his wife, Amanda, and they moved in together in 2001.  They welcomed their first daughter, Cheyanne, on June 10, 2004; their only son, Madden, on March 31, 2006; and their youngest daughter, Nakayla, January 22, 2009.  They traditionally adopted Jonathan in 2015.

Tony was a devoted father, a hands-on dad, and a dedicated worker.  He was a framer and his boss, Ernie, said he took pride in his workmanship and pride in his trade.  He was a great father, always helping with childcare. He was hard working, loyal, kind, humble, and always willing to help.  He was traditional and spiritual man.  He enjoyed hunting, picking sweetgrass, and making bannock.  His bannock usually won the taste test in the household!

Prayers will be held at McINNIS & HOLLOWAY (Cochrane, 369 Railway Street, Cochrane, AB) on Sunday, May 31, 2020 at 2:00 p.m., Wake Services to follow at the residence of Amanda Goodstoney (Morley, AB).  Traditional Feast on Monday, June 1, 2020 at his family home on Morley First Nation.  Graveside Service will be held at Goodstoney Cemetery (Morley, AB) on Tuesday, June 2, 2020.  Condolences, memories and photos may be shared and viewed on Tony’s obituary at www.McInnisandHolloway.com.

Share Your Memory of
Anthony (Tony)
Upload Your Memory View All Memories
Be the first to upload a memory!
Share A Memory
Send Flowers