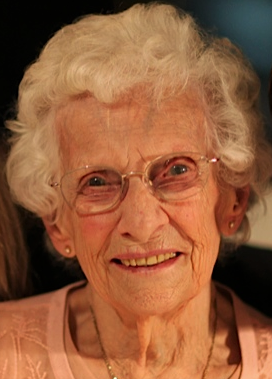 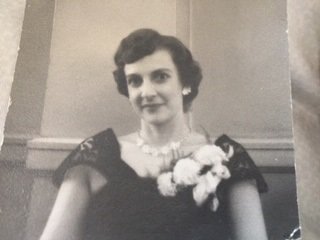 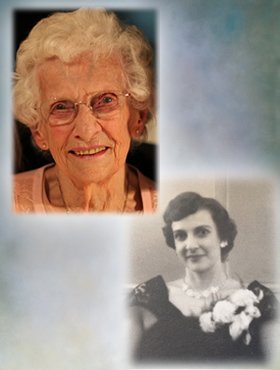 Lillian Lucille Martin (nee Huband), born in Ottawa on December 17, 1922, passed away on June 1, 2020, at the young age of 97 at the Rockyview General Hospital in Calgary, Alberta.

Lillian was married for sixty-three years to the love of her life, John William “Jack” Martin, who was born and raised in St. John’s Newfoundland, and passed away on November 2, 2009. Lillian was a person of character, free spirt and endless enthusiasm. She valued and supported her large and loving family, cherished every moment of life and was never a quitter. A force to be reckoned with, she contributed greatly to any community or group with which she was associated. In her younger years, she worked for Bell Canada in Ottawa and then in Montreal, where she and Jack raised their daughters. Lillian was a dancer, gardener and often volunteered at local school libraries. She was an advocate for reading, education and learning; traits that were passed onto her family. She was incredibly organized and disciplined and modelled an exceptional work ethic: homework first and then fun. There were plenty of both. She and Jack moved from Montreal to retire in White Rock, BC. They then came to Calgary nearly twelve years ago to be closer to family. They lived at The Chartwell Colonel Belcher Retirement Residence, where Lillian quickly began calling Wednesday night BINGO, organizing the knitting group, being an ambassador, sitting on the Food Committee, maintaining the Residence library, making lunches for children, and helping young people learn to read. She made other people’s welfare her business and was well known, and well respected wherever she went. Despite health issues, she always put the needs of her family and others above her own. She was kind and interested; she talked to everyone, listened, and knew so much about the wide circle of people about whom she cared. Lillian, with her charm, mischievous smile, positive energy and humour, brought laughter and energy to every occasion. She often was the life of the party and certainly never wanted to go home. She would make everyone feel welcome with her characteristic grace. At family gatherings she would smile at the antics of a loud and rambunctious crowd, and then call everyone to order by announcing that as the “matriarch” of the family, she had something to say. Her message was always a variation on the importance of family and how grateful she was to be surrounded by so much love. Obviously, she was surrounded by what she had built through decades of kindness, conversation and the occasional dish of ice cream. She was happiest when she was with her family, talking to family or friends, being active in her community, doing cross-word puzzles, or attending her daily exercise classes. She loved "Jeopardy!" and with her outstanding memory and knowledge base, she could have been a contestant. For someone who had not watched much sports, she spent a surprizing amount of time viewing curling. When we teased her that she had fallen for another man from Newfoundland, this time Olympic gold medal winner Brad Gushue, she simply giggled and kept her own counsel. Even during these tough times when she was not able to see family and friends, she remained positive and upbeat. Her biggest complaint was she could not get her hair done. She lived for her passions and treasured her family.

A Private Celebration of Lillian’s Life will be held at a later date. Please forward condolences, memories and photos may be shared and viewed on Lillian’s obituary at www.McInnisandHolloway.com.

The family is very grateful to the caring staff at The Chartwell Colonel Belcher Retirement Residence, and her personal support team who helped her live a long and fulfilled life. Lillian was greatly loved and will be greatly missed; she was a remarkable person and there is no other person like her.