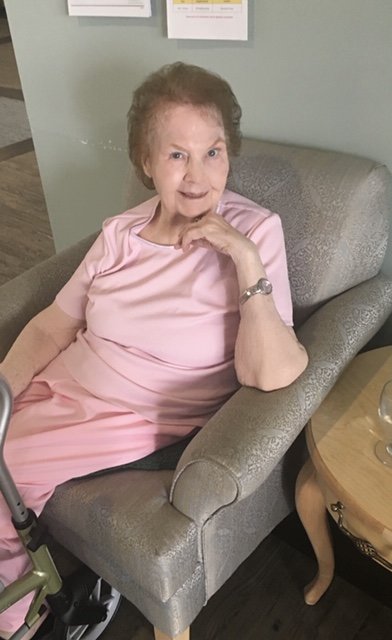 The joy in her life came from being with her daughter Debbie and granddaughter Jessica, only child and grandchild both, this created a special bond between the generations. The connection most represented by the laughter shared by these three during family gatherings. Margaret’s favourite celebration was Christmas time, she enjoyed the ornamentation, colour and ritual, and sharing this with family. A pet lover, she loved looking after Debbie’s (often cantankerous) cats when she had the chance.

Margaret last worked for the Department of Justice for the government of Alberta for ten years and retired from her position in September, 1997. Although apartment living in Edmonton, and later moving to Calgary to her own condominium, she was an avid gardener and planted many colourful potted flower arrangements. During the winter months she also enjoyed oil painting.

Besides Debbie and Jessica, Margaret is also survived by her son-in-law Keith of Calgary, AB, and sister Mary (Ralph) Ward of Victoria, BC. Margaret was one of five children, she was predeceased by her sister Audrey and brothers, William (Bill) and George.

A special thank you to the 5th-floor “Vista Community” of Walden Heights AgeCare facility for adding the personal touch to Margaret’s care over the past four and a half years and especially through the recent imposed isolation. Simply sitting with her and holding her hand meant a lot.

Funeral services will be held at a later date.  Condolences, memories and photos may be shared and viewed on Margaret’s obituary at www.McInnisandHolloway.com.