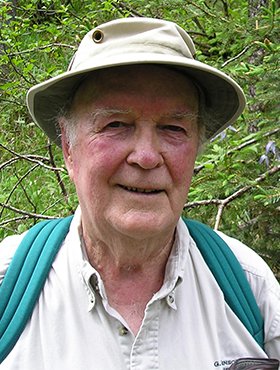 With gratitude for a life well-lived, we sadly announce that Ross Johnson passed away peacefully in Calgary, AB on Friday, June 12, 2020, at the age of 96 years.

Ross worked for the Alberta Provincial Government for thirty-seven years, rising to the position of Director, Technical Division in the Department of Lands and Forests.  He was active in their church, Delton Baptist and then Delwood Road Baptist Church in Edmonton. Ross and Ruth moved to Red Deer and then Calgary in 2005 to be close to family.

Before working for the Alberta Government, Ross spent a number of years working at his father’s lumber camp at Embarras, AB, on the Coal Branch.  He returned there to go fishing with his family for many years afterwards, always maintaining a particular fondness for the area.  Following Ross and Ruth’s marriage, Ross built the family home where he and Ruth continued to live until their move to Red Deer in 1991.  In 1961, Ross built the family cottage at Gull Lake where the family spent many memorable, joyful summers together.

Ross loved teasing others and would do so with a twinkle in his eye.  Throughout his life, Ross loved going for drives.  One of Ross’s favourite phrases was “My family is my greatest treasure.”   He was a proud and loving father, grandfather, and great grandfather.

Ross is survived by his children, Myrna (Jim Glenn), Kevin (Wendy Gardiner), and Garth (Dana Johnson); his grandchildren, Cliff (Kristen), Erik (Jahnaya), Tanis, Greg (Fatina) and Kara (Kyle); plus his great-grandchildren, Cooper, Henry, Levi, Jasper, and Jada.  He was predeceased by Ruth, his loving wife of sixty-two years, in 2010.

A Celebration of Ross’s Life will be held at a later date. Condolences, memories and photos may be shared and viewed on Ross’s obituary at www.McInnisandHolloway.com.  If friends so desire, memorial tributes may be made directly to M.A.D.D. (Mother’s Against Drunk Drivers), 14, 303 – 6707 Elbow Drive S.W., Calgary, AB T2V 0E5 Telephone: (403) 278-8081, www.madd.ca.

The family would like to thank Bow Crest staff and Doctor Catherine Heaton for their care and understanding during this challenging time.

Share Your Memory of
Ross
Upload Your Memory View All Memories
Be the first to upload a memory!
Share A Memory
Send Flowers