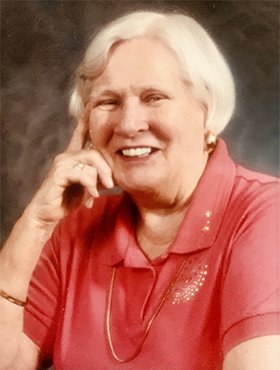 Doreen Audrey Hurtubise (nee Pfaff) of Calgary, AB, passed away peacefully on Wednesday, June 17, 2020, at the age of 89 years.

Doreen was born on October 2, 1930, and raised in Guelph, Ontario.  Mom loved life and was always up for a good time with family and friends. As a young lady, she won several Powder Puff Stock Car Racing derbies but was forced into early retirement when the nuns at her nursing school read about her last victory in the local paper. She graduated from St. Joseph's Hospital School of Nursing in Guelph (1952) and was then hired to work in the operating room. A year later, she moved to post-graduate work in Operating Room Procedure at Johns Hopkins Hospital in Baltimore, Maryland.  In 1955 she packed up and headed west to work in the OR at the Holy Cross Hospital. Soon after, she met her future husband Leo Hurtubise. They married in Guelph on September 22, 1956, and made Calgary their home.

Doreen became a stay-at-home mom who volunteered with several organizations. Some of her fondest times were the years she spent with her young family in Australia, summers at Skeleton Lake (AB) and later in Invermere (BC), winters in Arizona with Leo, family gatherings, friends, grandchildren and her dogs. She was a tennis player, a qualified lifeguard and swimming instructor, downhill skier, golfer and an amazing cake decorator who for 20+ years hosted the annual Charleswood Ladies Christmas Carol Sing. In her "spare" time, Doreen loved gardening, a good romance novel or a game of Bridge, Crib or Gin Rummy. Her favourite phrase was "Tell me what you want and I'll tell you how to get along without it". After raising her family she attended the Foothills Medical Centre to re-qualify as an RN and then worked in the O.R. until her retirement. She loved her work.

The family would like to thank Cedars Villa Nursing Home (Poplar Unit) for their care and compassion in the few short months mom lived there.

A private family service will be held following cremation. Condolences, memories and photos may be shared and viewed on Doreen’s obituary at www.McInnisandHolloway.com.

Arms that hold us

Mind that leads us

Love that binds us

On your next adventure