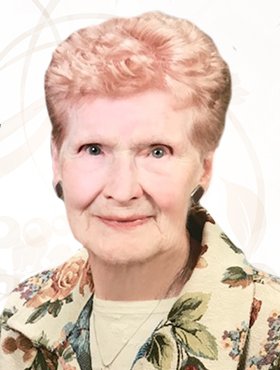 Irene Louise Clark (nee Hunter) passed away peacefully on Sunday, June 14, 2020 in Calgary, AB with her loving family holding her in their hearts. A native and proud Nova Scotian, she and her husband Johnny lived and worked their adult lives in Halifax, moving to Calgary in 1991 to make their home near their pride and joy and only daughter, Holly and her family, whom they adored.

Gentle and quiet of spirit, Irene was the epitome of grace, elegance, kindness, humility, courage and strength. She was a loving and much beloved wife, mother, grandmother, great-grandmother, daughter, granddaughter, sister, aunt, cousin and friend.

Irene was a loyal employee of The Halifax Herald for 41 years. She was a devout member of the United Church of Canada, regularly attending and teaching Sunday School at St. Paul United Church, Westville; St. John’s United Church, Halifax, where she was an active member of the Mary Todd Unit; and Woodcliff United Church in Calgary, where she tended to the church bulletins faithfully for many years. In early years she was very active in Canadian Girls in Training (CGIT). In Calgary, Irene was a volunteer in the grandparent program at Wildwood Elementary School. She was an enthusiastic bowler and an avid sports fan, with a special love for baseball and hockey. Irene delighted in reading and writing poetry (which she penned under the name “Trailing Arbutus”). She adored the beauty of the Nova Scotia Mayflower; cherished her homeland’s sea-bound coast; appreciated the majesty of the mountains; and treasured the freedom and grace of butterflies.

She was predeceased by her husband John (“the Westville Flash,” an inductee into the Nova Scotia Sport Hall of Fame), who was the love of her life and to whom she was married for 52 happy years. Together they had many grand adventures!

A Celebration of Irene’s life will be held at a later date. If friends so desire, memorial tributes may be made directly to the Alberta Cancer Foundation in support of breast cancer research or to the N.S. Sport Hall of Fame.

The family extends sincere thanks to Drs. Nancy Love and Naomi Rittberg and their nurse Brenda Minerson of Calgary for their compassionate care over many years. Also thanks to Dr. Maggie Snyman, the Shawnessy and Woodlands healthcare teams at AgeCare Midnapore and AgeCare Glenmore and the caregiving team at Aspen Care Calgary. Special thanks to dear friends, Connie Dela Cruz Villania, Valerie Potter, Leola Olsen and Jacquie Broadfoot, all of Calgary, and to Mary Lou Croft of Nova Scotia for their faithful friendship in Irene’s latter years.

“The Lord watch between me and thee, when we are absent one from another."

Share Your Memory of
Irene
Upload Your Memory View All Memories
Be the first to upload a memory!
Share A Memory
Send Flowers