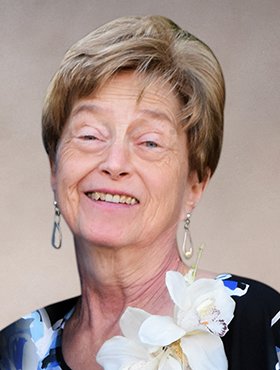 It is with heavy hearts that we announce Mary’s passing on Sunday, June 14, 2020 at the age of 76 years. Beloved wife, mother, and grandmother. Mary will be remembered as a loving, kind, outgoing, positive person who, when faced with many challenges, stared them down and would not let them define her.  She had a heart of gold, was generous by nature and always put others first. Her family and friends will miss her dearly.

Mary M. Hart was born December 28, 1943 to Lewis and Lorraine Laing in Marquette, MI. After high school, Mary attended and graduated from Northern Michigan University, where she was very active in her sorority (AXD). After graduation, Mary was a teacher in Champion, MI, the Ovid-Elise Schools in lower MI, and schools in the Chicago suburbs.

Mary and Dave’s love story began at the young age of 7 and 8. They were married August 20, 1966, and lived in Lansing, MI, while Dave finished school. After three years in Chicago, they moved to Dallas, TX, in August, 1972. Their two children, Stephen and Jessica, were born in Texas and Mary enjoyed working in the home, raising the children.  She was very active in their lives and community activities. The Hart family packed up their home and made the long journey north to Calgary, in 1983, where they have made their home ever since. Mary continued to be engaged in the schools Stephen and Jessica attended. She also worked at the Calgary Board of Education in a variety of positions until 2002. Mary was extremely proud of her family, cherished watching her grandchildren growing up, adored her friends, and was dedicated and passionate while working with the IODE organization for over twenty years. Mary and Dave were adventure seeking travelers, including visits to Australia, Granada, Hawaii, Mexico, Michigan, and the family cabin in Whitefish, MT, until her health challenges mounted. Undaunted, Mary kept a resilient heart and positive outlook in the face of these challenges until June 14, 2020.

A Celebration of Life will be held at McINNIS & HOLLOWAY (Crowfoot, 82 Crowfoot Circle NW, Calgary, AB), on Friday, June 26, 2020 at 2:00 p.m. Reception to follow in the Hospitality Centre at the Funeral Home.