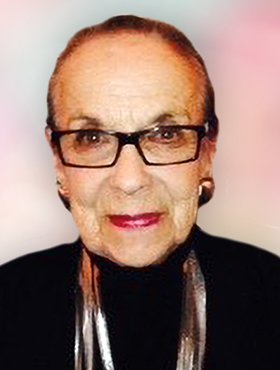 Joyce Doreen Stalinski (nee Stothers) beloved wife of the late George Stalinski of Calgary, AB, passed away peacefully on June 22, at the age of 89 years with her devoted daughter and loving family friend by her side.

Joyce was a proud Calgarian and never wanted to live anywhere else.  Her extraordinary mother Jenny Belanger Stothers convinced all of her six children that Calgary was the "best place in the world"; all of the children, other than Margaret who died in childhood, continued to live and raise their families in Calgary.Joyce was accomplished and independent all the while being a devoted wife, mother, daughter and sister.  She had a well-known career in retail where her elegance, fashion sense and business skills led to responsible positions in some of the best retail outlets in Calgary.  She eschewed a role on a national scale in favour of family responsibilities, but continued to work outside the home throughout her marriage and life until retirement.   She received an offer to change careers and work in the Calgary Separate School system secretarial and assistant librarian roles in the latter part of her working life.

Joyce's priority was always her family.   George was the love of her life and she was a partner in all aspects of his life, supporting his dedication to his social services career in the City of Calgary as well as all the implications of his magnetic and big personality.  George supported Joyce in all of her endeavours and together they were a beautiful, fun, interesting team and enjoyed their families, friends and traveling the world.  At the same time, Joyce was a devoted, wise and conscientious mother and she and Joanne enjoyed a deep and loving relationship throughout her life.   George and Joanne understood that there was nothing that Joyce could not do: from hat making and sewing all clothes for Joanne and herself,  to wallpapering, cooking international foods, speed skating, skiing, and, yes, roller blading.

But the most remarkable aspect of Joyce, other than her devotion to family first, was the gentle force of her character.  She was intelligent and wise, interested in everything, and ready to go anywhere and do anything. A lover of libraries, she often visited more than one in a day to research some new interest.  Joyce was a regular at the opera, theatre productions and Broadway musicals, had a sense of humour like no other, and was known for her million-dollar smile. She told people how wonderful they are, how they are perfect as they are, and always found a way to be supportive.  She was well named as she was full of joy and grateful for every day and every kindness. Joyce possessed striking beauty, grace and elegance, together with sweetness and spunk. She will be missed terribly by her daughter, family members and friends, and even acquaintances. It was a lovely thing to be in Joyce's orbit and we are all grateful for her and to her.

Joyce was predeceased, most tragically, by George at the age of 62 years in 1992; also leaving this plane before her were her sister, Margaret, her father, Thomas Gordon Stothers, her mother, Jenny Belanger Stothers, her brother, Gordon Stothers, and sister Edith Wells.  She is survived by her loving daughter Joanne, sisters Delores Gallelli and Shirley Black and nieces and nephews.

A private funeral service will be held. Condolences, memories and photos may be shared and viewed on Joyce’s obituary at www.McInnisandHolloway.com.

If so desired, friends may make a donation in Joyce's name to the Calgary Public Library Foundation, Calgary Opera or the charity of their choice.

Share Your Memory of
Joyce
Upload Your Memory View All Memories
Be the first to upload a memory!
Share A Memory
Send Flowers