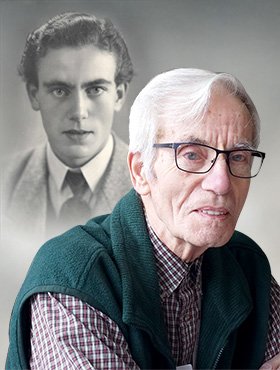 Kees was born into a large family of fourteen children in Avenhorn, the Netherlands.  He had many fond memories of speed skating on the canals, and was very proud of skating in 100 km races when he was a teenager.  Kees met the love of his life, Mary “Riet” Negenman, as a young man and followed her to Canada in 1953.  They arrived at Pier 21 in Halifax and travelled the arduous journey to southern Alberta. They married soon afterward and forged a new life for themselves with the support and comradery of family and other Dutch immigrants. Kees wasn’t afraid of hard work - he dug the basement of his first house by hand with a pick and shovel. He took whatever work he could find to support his growing family. Kees was initially employed with Crane Industries, Palm Dairies, the Catholic School Board, and eventually built a successful business in Calgary as a General Contractor and Home Builder. Together he and Riet received numerous awards for outstanding quality of workmanship of the homes they built. Their drive and strong work ethic was passed along to all of their children.

Kees and Riet instilled their love of the outdoors into their young family, creating many fond memories of camping at Radium and boating at the Shuswap and Little Bow. They made several RV trips to Arizona and across Canada. In their retirement they proudly volunteered for many years as Campground Hosts at William Watson Lodge in Kananaskis Country, a barrier-free campground for seniors and persons with disabilities.  After Riet’s passing in 2016, Kees eventually moved to Auburn Heights Seniors Residence to be near his sister Maria who lived in the same complex. Known for his quirky sense of humor, Kees spent his days joking around and having fun among friends.

Kees is survived by his sons, Charlie (Susan), Ron, Joe (Pam), Brian; and daughter Yvonne (James), grandchildren, great-grandchildren, and his sister Anna (Jan) Heddes of the Netherlands. Kees was predeceased by his wife Mary and his son William (Bill).

Keeping with Kees’ wishes there will be a private remembrance at a later date. Condolences, memories and photos may be shared and viewed on Kees’s obituary at www.McInnisandHolloway.com.

If friends so desire memorial tributes may be made in Kees’ name to Meals on Wheels https://www.mealsonwheels.com, the Alzheimer Society of Calgary https://www.alzheimercalgary.ca, or a charity of your choice.

Share Your Memory of
Kees
Upload Your Memory View All Memories
Be the first to upload a memory!
Share A Memory
Send Flowers