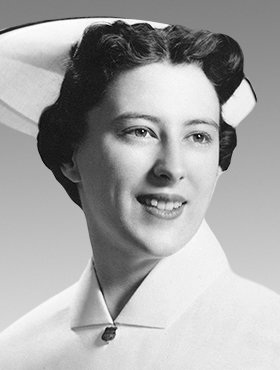 It is with great sorrow we announce the peaceful passing of Sheila Heater on June 19, 2020.

Sheila was born in Calgary, AB at the Holy Cross Hospital on December 31, 1935. She stayed in Calgary attending St. Mary's Girl's High School and then trained at the Holy Cross nursing program graduating in 1957 to become an RN. Working as an ER nurse, Sheila recalled many funny stories including her favorite the "Sam and Gloria" story. She loved playing cards with friends, doing embroidery, crossword puzzles, sewing and crafting. Each Christmas the family hangs their hand made stockings with extra special care.  Sheila invested in family and building memories and traditions were important to her including the annual Denver Christmases, birthday celebrations, Sunday dinners, TGIO dinners, McGoldrick family reunions, family bridal and baby showers along with so many more occasions. She was the fabric that held us together, from her 'command central post' at home, Sheila took care of all of her family, was active in her nurses alumni association and mentored many as she listened with a nurturing ear. The hole she leaves is larger than she knew, she will be missed by many, loved as a mother, wife, Nana, Sasha, Granma Sheila, aunt and friend.

She is survived by her husband of nearly fifty-seven years, William (Bill) Heater. She leaves behind her three daughters, Brenda, Marna and Jacquie; sons-in-law, Nat and Sean; and her grandchildren, Brett, Staci, Sandra, Brenna, Jonah and Billy. Sheila also leaves her big brother John (Jack) Smith and his family in Denver including nieces Sheila (David), Stacey and Shannon (Jeff), great-nieces and nephew Jordan, Erin, Jonathan, Aubree and Kaylee (Josh); as well as great-grand niece Elika. She was predeceased by her parents, Mabel and John Smith, her-sister-in law Marna Smith, best friends, Tim and Maryel Volk and countless uncles, aunts, family and friends.

Sheila has requested that a Celebration of her Life be held at a later date when we can all be together. In lieu of flowers, if friends so desire, memorial tributes may be made directly to the Heart & Stroke Foundation of Alberta, www.heartandstroke.ca. Condolences, memories and photos may be shared and viewed on Sheila’s obituary at www.McInnisandHolloway.com.

Share Your Memory of
Sheila Anne
Upload Your Memory View All Memories
Be the first to upload a memory!
Share A Memory
Send Flowers