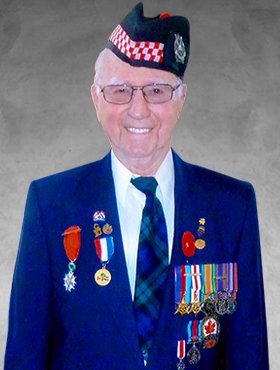 Walter was proud of his WWII military history with the Calgary Highlanders and was recognized for his service by Holland (Battle of Walchern Island) and Knighted by France for his role in her liberation in 1944.  Wally sang in the Crescent Heights United Church choir for decades and was a member of The Royal Troubadours for many years, entertaining around Southern Alberta.  In retirement, he and Lorna toured around the world and RV’d their way across North America.

Dad loved to tell stories, many of which were true, about his early life riding the rails during The Depression.  He always saw the bright side of the situation and kept his positive attitude until the very end.

A private Graveside Service will be held at a later date. If friends so desire, memorial tributes may be made directly to Wounded Warriors, #1900 – 1500 West Georgia Street, Vancouver, BC, V6G 2Z6 Telephone: (888-706-4808) www.woundedwarriors.ca.

Condolences, memories and photos may be shared and viewed on Walter’s obituary at www.McInnisandHolloway.com.

Services for Walter ONIA
There are no events scheduled. You can still show your support by sending flowers directly to the family, or planting a memorial tree in memory of Walter ONIA.
Visit the Tribute Store