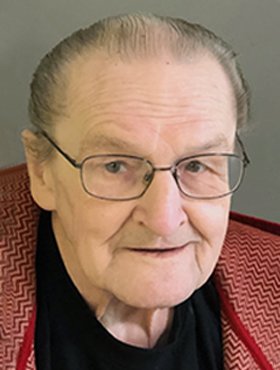 Surrounded by loved ones, George Rusznak, of Okotoks passed away at the South Health Campus in Calgary, Unit 58 on Saturday, June 27, 2020 at the age of 83 years.

The family would like to send out our heartfelt thanks to all the health care staff that looked after George while he was there from June 9th to the day he passed. We would also like to thank all the staff of AgeCare, Walden Heights in Calgary for making him laugh and taking wonderful care of him while he was with you all.

George was born in Monarch, AB on June 3, 1937.  He was raised in the Lethbridge area and lived and raised his family in both Edmonton and Calgary. After spending a few years in Cranbrook, BC he along with his wife of the past 32 years, Cornelia (Connie) retired to Okotoks, AB where they had and continue to have many friends.

George loved to golf and spent many a day on the course for both professional and personal reasons and even when he had to give up swinging the club, he had some friends that would take him out on the golf cart, to just enjoy the course, the fresh air and of course, the laughs.

George was a beloved son, brother, husband, father, uncle and friend.  He will truly be missed by many.  George is survived by his wife Cornelia (Connie) of Okotoks and her six children (Brian, Barry, Bob, Tim, Sandra and Suzanne) and their families. He is also survived by his daughters, Ronnie in Vancouver and Carrie-Lynn (Raz) of Edmonton; his three wonderful grandsons, Ryan (Rebecca) of Vancouver, Tyson of Ste Saint Marie and Andrew (Ali) of Calgary and was recently blessed with a great-granddaughter Savannah (Ryan & Rebecca) and recently received the news that a new great- granddaughter is arriving in September and her name will be Georgia (Ryan & Rebecca) and she will be called Georgie just like so many people referred to him as. George is also survived by his brother Paul of Lethbridge and several nieces and a nephew.

George did not want a service or as he would say….‘anything fancy’ and will be cremated but the family will take him golfing next summer and scatter his ashes as well as take him back home to Lethbridge and lay him to rest with his parents and his sisters so they will all be together again.  Condolences, memories and photos may be shared and viewed on George’s obituary at www.McInnisandHolloway.com.