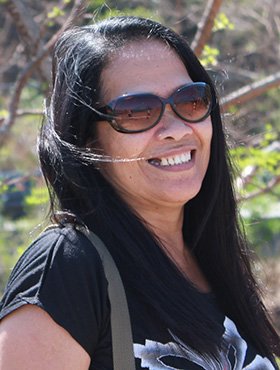 Magda Dominguez, passed away peacefully in her home on Tuesday, June 23, 2020 at the age of 67 years after a heroic battle against pancreatic cancer.

She was born on December 15th, 1952, in San Fernando City, La Union Philippines, to parents Fernando Ferrer Sr. and Florencia Austria Ferrer. Born and raised in a small town along with her seven siblings, Magdalena lived a humble life. She knew hardship, but her family surrounded her with love, laughter, and kinship.

She learned early on to appreciate the little things in life and that family is everything. Magdalena instilled her children that to succeed, one must not be afraid to work. In her lifetime, she has worked many jobs, including being a bus vendor, retail manager, nanny, sari sari store owner, housekeeper, retail night stock person, and many more.

Magdalena had a vibrant energy that charmed family, friends, and strangers alike. Her distinctive laughter made others around her smile and her inappropriate jokes and stories made people laugh. Friends and family would seek her company for a good cheer, or if they were in need of a confidant. To be with Magda is to be light of heart, and for worry to dissipate. She was family to all.

In her downtime, Magdalena had eclectic hobbies; from baking to hiking, to travelling, she was not one to be bored. For her children growing up, Magdalena would surprise them with baked goods to greet them home. Baking gave her a moment of quiet happiness, and watching people she adored scarf down her sweets gave her satisfaction.

Even before it was en vogue, Magdalena enjoyed plants. She would set aside time to wipe down her monsteras, and rubber plants so they “shine.” But her favourite houseplants are her orchids. She is known to collect different orchid types, and she would often show them off to guests and friends alike, whether they were interested or not. In the spring and summer, she can be found posing in her flower garden to post on Facebook.

But her most favourite hobby was to travel. She always looked forward to both the journey and destination.  Excursions out of country, to out of town, or even just driving around Calgary, she took pleasure being part of the action. When her children had grown, she took any reason to sight see, she could. She travelled extensively within Alberta and BC, and enjoyed short visits to Eastern Canada, and parts of the US. She had gone back to the Philippines three times to spend time with her extended family, and travelled all over Northern Philippines.

Magdalena will be sorely missed by her partner, Daryl Jerace; her four children, Joy Dominguez, Cody Jerace, Jose Dominguez and Linda Jerace; her four adored grandchildren, Dion Jerace, Angelo Jerace, Emily Jerace, and Cristiano Dominguez. She is also survived by her sisters Erlinda Nillo, Lydia Laron, Consuelo Nacionales, and Teresita Nieveras, and her brother Fernando Ferrer Jr; their spouses; and their children.  She was predeceased by her eldest son, Lance Jerace.

Funeral Services will be held at St. Albert The Great Catholic Church ( 10 Prestwick Drive SE , Calgary, AB) on Friday, July 03, 2020 at 1:00 p.m.  Reception to follow in at the at the Home of Magda Dominguez (187 Copperfield Close SE,  Calgary, AB) Following prayers on Thursday, July 02, 2020.  Condolences, memories and photos may be shared and viewed on Magda’s obituary at www.McInnisandHolloway.com.

Share Your Memory of
Magdalena
Upload Your Memory View All Memories
Be the first to upload a memory!
Share A Memory
Send Flowers