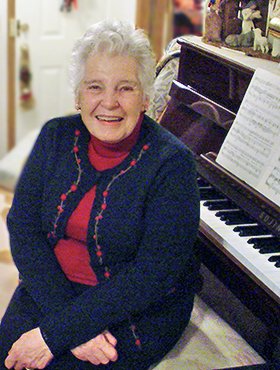 Joan Marjorie Froggatt was born to Charlotte ("Jeanne") and James Froggatt in Regina, Saskatchewan. She moved to Rosthern, Sask. in her  teen years.

Joan obtained a Teacher's Certificate from the University of Sakatchewan, and went on to start her teaching career in a one - room schoolhouse in rural Saskatchewan.

She was a Girl Guide leader in Rosthern,  which was just one of many ways she served others over the years.

While living in Rosthern, Joan met a young RCMP constable, Bill, and married him on July 12, 1952 in Rosthern, SK. This led to a series of many moves around Sakatchewan as an RCMP couple. They would become parents to four daughters. Joan and Bill moved to Calgary in 1972, following Bill's retirement from the RCMP. Their marriage was to last fifty-six years, following Bill's passing in 2008.

Joan was an accomplished pianist, even served as accompanist to a professional violinist in the early years.  Her love of music was also an integral part of her teaching style. Ever the teacher, she taught piano to countless students at her home over the decades. She later returned to (assistant) teaching kindergarten at a private school in Calgary for a few years before retirement.

Joan and Bill were long-time members of Holy Nativity Anglican church and served their church community in various capacities. They were also very active with the RCMP Veterans' Association, which she carried on with after Bill's passing.

Although she was a homebody at heart, with Bill's coaxing, they enjoyed travels to various locations within Canada, to the U.S.A., and other countries. Yet, their favourite spot to vacation with the family was Wakesiu, where they created many happy memories every summer.

Joan is survived by her four daughters and their husbands, Barbara (Nasir) Kara of Edmonton, AB,  Cathy(Mark) Snell of Calgary, AB, Susan (Ted) Tsagkaris of Toronto, ON and Judy (Daryl) Henry of Calgary, AB; twelve grandchildren, Dru and Jared (Amanda) Kara; Christopher and Caroline Snell;  Nomiki, Taeo, Kiara and Kiri Tsagkaris; Ashley, Lindsay, Patrick and Mitchell (Avery) Henry; as well as five great-grandchildren, Kianna and Kasai (Ashley), Joy, Hope and Faith (Lindsay) and was very much looking forward to welcoming another,   Mitchell and Avery's son, due early August.  Joan is also survived by her two brothers and their families, Jim (Joanne) Froggatt/ Lynn, Leigh; and Duff (Linda) Friesen/Leah. She was predeceased by her brother John Froggatt and nephew Bram Friesen.

A private service will be held. Condolences, memories and photos may be shared and viewed on Joan’s obituary at www.McInnisandHolloway.com. If friends so desire, memorial tributes may be made directly to Well Springs Calgary, https://wellspringcalgary.ca/donate/.

Share Your Memory of
Joan
Upload Your Memory View All Memories
Be the first to upload a memory!