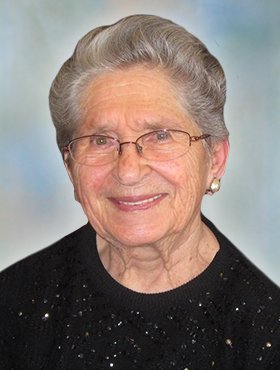 Liz was born in Bunkovce, Czechoslovakia. At the age of twelve, she came to Calgary with her mother and brother to join her father who was working for the CPR. During her school years, the family lived in Canmore and Calgary. Liz met her late husband Wally at the Slovak social club in Calgary, married him in 1950 and together they raised seven children. They lived for many years in Parkdale. Liz was a faithful parishioner of St. Bernard's Catholic Church, singing in the choir and active in CWL.

Liz was the last surviving member of her family having been predeceased by her step sisters, Susan and Anna in Slovakia; her step brother John Babic and his wife Ann in Canada. She was also predeceased by her grandson Sam Collins and son-in-law Bob Miller, and in 2019 by her beloved husband Wally.

Mom was very dear to all of us and will be sadly missed.

A Memorial Mass and Reception will be held at a later date so that those who loved her, far and near might be able to gather one last time at St. Bernard’s Catholic Church, Calgary and celebrate the life she lived. Details to be announced when Covid 19 travel restrictions are lifted and dates are confirmed.

The family wishes to thank the staff, nurses and caregivers at the Wentworth Manor along with a special thank you to the recreation department, who facilitated daily virtual visits with Liz’s children and became “Part of her family” over the past four months.  Donations can be made in Liz's memory directly to the Recreation Program of the Wentworth Manor (Brenda Stratford Foundation), 4628 Montgomery Blvd NW Calgary, Calgary, AB, T3B 0K7, (https://thebsf.ca/ways-to-give/donate/online-donation-form.html). Condolences, memories and photos may be shared and viewed on Elizabeth’s obituary at www.McInnisandHolloway.com.

Share Your Memory of
Elizabeth “Liz”
Upload Your Memory View All Memories
Be the first to upload a memory!
Share A Memory
Send Flowers