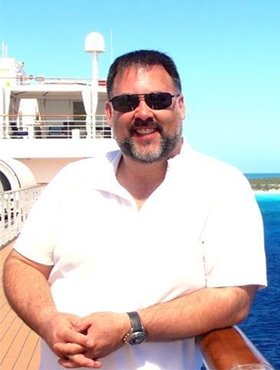 Rob was born in Regina, SK, to Bruce and Debbie (Jones) Edin.  He was the apple of everyone’s eye from the start and was so adored. He spent his first years in Regina and moved with the family to Melfort in 1976.  He graduated from MUCC with the class of 1989 and went on to complete a bachelor of administration from the University of Regina in 1996. He carried his friendships with school friends from Melfort and the new ones made at University with him through his life.  He began a successful career in sales with many awards for achievements, many new friends and was working for Insight Insurance at the time of his death.  He loved football and went to Jamestown on a scholarship. He was “the fan” for the Riders but his love for sports didn’t end there. Hockey, floor hockey, and curling – he was good at a lot of different things before a bicycle accident hurt his knee. His other passions included travelling around the world – and if on a cruise ship, even better, history, dungeons and dragons which he played with a group of friends that spanned decades, computers and technology, camping, fishing and taking his children, the loves of his life, to the beach and the lake. He loved spending time with family. He was an avid supporter of his children, never missing a choir or cheer practice and always making time to go practice driving.

Rob had many memorable trips but his trip to the four corners, his trip to Europe to attend his best friend Jason’s wedding, his cruise in 2011 with Theresa and his four kids to Half Moon Cay, visiting Disney with the kids, and the Disney Cruise with his kids were the highlights in his life.

He suffered from the losses of his mother Debbie (Jones) Edin in 2010, and sister Danita Edin in 2012.

Funeral Services will be held at McINNIS & HOLLOWAY (Fish Creek, 14441 Bannister Road SE, Calgary, AB) on Monday, July 13, 2020 at 2:00 p.m. Reception to follow in the Hospitality Centre at the funeral home.  Condolences, memories and photos may be shared and viewed on Rob’s obituary at www.McInnisandHolloway.com.