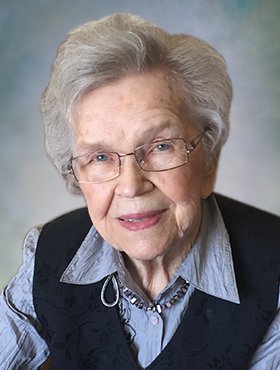 It is with deepest sorrow that we announce the passing of our mother, Elizabeth (Isabel) Kanik on Thursday, July 9, 2020, at the age of 94 years.

Isabel was born on the farm near Goodeve, Saskatchewan.  She had many fond memories of growing up on the farm with her large family.  After she finished her schooling in Goodeve, she attended “Normal School” to become a teacher. Her first post was a one room school in Saskatchewan, and she boarded with a local family.  She moved west to take a teaching position in Jumping Pound just west of Calgary during which time she boarded with the Copithorne family.

She connected with John (Jack) Kanik who was also from Goodeve and who was working at the Exshaw Cement Plant after the war.  They married on December 26, 1948 in Banff, Alberta. They lived in Exshaw for several years, during which time they started a family. In 1955, they moved to Gleichen, Alberta where Jack started a plumbing and heating business.

After staying home for several years with her children, Isabel resumed her teaching career and taught at Old Sun and Gleichen schools.

Isabel was very artistic and became an accomplished painter. Many of her paintings hang in the homes of her relatives and friends and were purchased at art shows.  She was a highly active member of St. Victor Catholic Church, attending regularly and, along with the other ladies, cleaning the church and making countless sandwiches for gatherings. Isabel was a member of the Gleichen Legion where she and Jack enjoyed many dances and social gatherings over the years. She also enjoyed singing in the Gleichen choir. She was always sports-minded and very much enjoyed golfing and curling with her many friends. Isabel and Jack enjoyed traveling and visited Europe, Hawaii, and other points in the USA.

As Jack was the eldest of ten children, when his brother and sisters moved to Calgary, Gleichen became the family gathering place and Isabel the chief cook and “Den Mother”.  She loved company and was a gracious hostess.

Jack passed away in 1995 and Isabel moved to Calgary in 1996. She made friends in the condos and seniors care homes where she lived.  She continued to enjoy social activities with friends and loved to spend time with her children and grandchildren.

Isabel was predeceased by her husband Jack, and her seven sisters, and two brothers.

A private family Celebration of Isabel’s Life will be held at some time in the  future.

We thank all the caregivers at St. Teresa Place where she lived her final three years. The staff at St. Teresa treated her with respect, care and compassion and helped her keep her dignity through difficult times as her health deteriorated. Our family thanks all these caregivers from the bottom of our hearts.

Share Your Memory of
Elizabeth (Isabel)
Upload Your Memory View All Memories
Be the first to upload a memory!
Share A Memory
Send Flowers