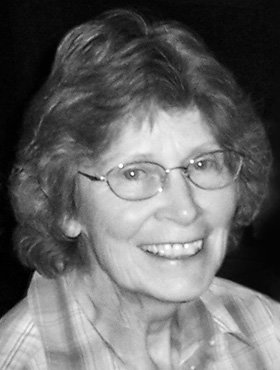 With great sadness and memories of a loving and gracious woman, we announce the passing of Margaret in Calgary, AB on Wednesday, July 15, 2020.

Born in Carshalton, England on October 10, 1935 to William Gayler and Elizabeth Chambers (nee Stephens), Margaret’s early family years in Wallington were disrupted during the V-I and V-II rocket attacks on London during WWII, when she and her siblings were evacuated to relatives while her mother kept house and her father fought the fires in London.

In 1956, Margaret moved to Canada and, one year later, met Hugh Main in Vancouver. When Margaret was set to sail back to England, Hugh realized he had met his great love and proposed to her via telegram. On returning to Canada, Margaret and Hugh were married in Vancouver, lived for a few years in Montreal (where both David and Andrea were born) before settling in Calgary—the place Margaret felt was home.

Once settled in Calgary, Margaret seized opportunities to grow her own interests while remaining the touchstone of her own family. Her love of education and children led her to volunteer as a docent at the Glenbow Museum and then complete an undergraduate degree in Education at the University of Calgary. In 1980, Margaret graduated with Distinction and was awarded the Clarence Sampson Gold Medal in Education.

Margaret taught at several Calgary elementary schools, finding her calling teaching and mentoring children in schools with underserved community members. Upon retirement, Margaret turned her sights to combining her love of teaching with a deep love of Alberta’s wild area and wildlife as a vital and treasured part of the Alberta Wilderness Association team. Many Calgarians knew Margaret for her work organizing Calgary’s famous wildlife mural competitions at the Calgary Tower where she oversaw the completion of more than 140 murals.

As an avid letter-writer, Margaret maintained lifelong friendships and long-distance family relationships.  Margaret loved to spend time birding with friends and hiking in the Canadian Rockies with family and friends—all of whom will miss her dearly.

Condolences, memories and photos may be shared and viewed on Margaret’s obituary at www.McInnisandHolloway.com. In lieu of flowers, if friends so desire, Margaret's family would like to remember her passion for wilderness and wildlife with memorial donations to the Alberta Wilderness Association, 455 - 12th St NW, Calgary AB T2N 1Y9, www.albertawilderness.ca/donate.