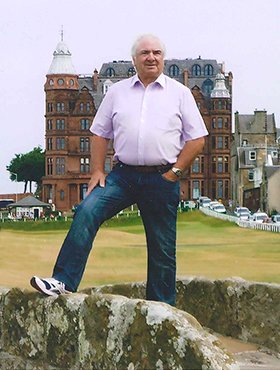 If friends so desire, in lieu of flowers, tributes may be made directly to the Canadian Pulmonary Fibrosis Foundation, Attn: Calgary Chapter (47 Squire Bakers Lane, Markham, ON L3P 3G8, Telephone (905) 294-7645, www.cpff.ca. or to the Alberta Children’s Hospital Foundation, 28 Oki Drive NW, Calgary, AB T3B 6A8, Telephone: (403) 955.8818. www.childrenshospital.ab.ca Both charities were near and dear to John’s heart.

It is with profound sadness that we announce the passing of John after a long and courageous battle with Idiopathic Pulmonary Fibrosis on Thursday, July 23, 2020 at the age of 74 years.

John was born in Hillsborough, Northern Ireland.  He later moved to Belfast where he met his beloved wife, Marie. They married in 1972 and proceeded to have their three children, Brian, Karen and Fiona.  In June 1981, they made the decision to move their family to Calgary where all remain.

John may have lived in Canada for more than half of his life, but his blood ran true “Orange” and he travelled to Belfast, on many occasions, to attend the 12th of July Parades where he proudly walked and represented his Canadian Lodge. He received his Journeyman license for a Heavy Duty Mechanic in Belfast at the age of twenty-one, and he had worked for Dale Farm until he moved to Calgary.  He worked as a Heavy Duty Mechanic until he started his own company, JC Enterprise, doing scrap metal.

John had many accomplishments in life but if you’d ask him what his greatest accomplishment were, he would proudly say his family.  John was an avid motorcyclist and owned many throughout his life. He travelled to the Isle of Man TT Races several times, as well as attend the Ulster Grand Prix on a somewhat annual basis.  Other than motorbikes, John also loved to travel, and he and Marie travelled to many beautiful destinations around the world.   Some of their memorable trips includes a couple of trips to Monte Carlo, Nice, Cabo San Lucas and Saint Lucia.

John is survived by his loving wife, Marie of forty-eight and a half years; his son, Brian (Helen), and his children, Skylar, Jaiden and Ellie; daughters, Karen (Sean), and  her daughter Payton, and Fiona (Tycho), and their children, Jordenne, Tanner, Daymond, Maria and Eden; and was a great-grandfather to Kaden.  John is also survived by his loving sister Dorothy (Alan), brother David; in-laws, Gloria (Ronald), as well as numerous nieces and nephews in Calgary and Northern Ireland.

He was predeceased by his parents, James and Eileen, his sister Margaret, brother Beattie; and his in-laws, Herbert and Georgina.

Condolences, memories and photos may be shared and viewed on John’s obituary at www.McInnisandHolloway.com.

If friends so desire, in lieu of flowers, tributes may be made directly to the Canadian Pulmonary Fibrosis Foundation, Attn: Calgary Chapter (47 Squire Bakers Lane, Markham, ON L3P 3G8, Telephone (905) 294-7645, www.cpff.ca. or to the Alberta Children’s Hospital Foundation, 28 Oki Drive NW, Calgary, AB  T3B 6A8, Telephone: (403) 955.8818. www.childrenshospital.ab.ca Both charities were near and dear to John’s heart.

The family would like to extend the heartfelt thank you to their family doctor, Dr. Gradwell, John’s lung specialists Drs. Fell and Lohman, as well as the palliative care team who cared for John. And a  special thank you to Tobi for her kind and compassionate nature toward John and our family.

Share Your Memory of
Samuel “John”
Upload Your Memory View All Memories
Be the first to upload a memory!