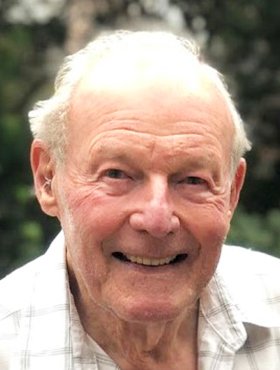 Trevor was born on April 7, 1934 in Ealing, England and was the middle child of three boys.  Trevor joined and served in the Royal Navy from 1953 to 1964.  He married Jennifer Hamilton in 1966 and had two sons, Geoff and Nicholas.  Trevor transferred his family with Commercial Union Assurance to Ontario in 1974 and then to Calgary in 1980, retiring in 1996.

Trevor enjoyed golfing in the summer and curling in the winter, and when not playing you could find him watching the TV.  He loved to travel, especially cruising of which he took several to many different ports of call.  His other hobbies included building model ships and he enjoyed brewing his own beer and wine.

Trevor will be greatly missed by his sons, Geoff and Nicholas, daughter-in-law Wendy, son-in-law Jason; and his two granddaughters, Amanda and Jenna.  He was preceded in death by his wife Jennifer; and brothers, Brian and Dudley (Ging).

The family would like to thank Tash Ellison for her companionship and care she gave to Trevor, especially over the last couple of years.

In accordance with his and the family’s wishes, cremation has occurred and due to the current COVID19 restrictions a memorial service may be held at a future date.  Condolences, memories and photos may be shared and viewed on Trevor’s obituary at www.McInnisandHolloway.com.

Services for Trevor COOK
There are no events scheduled. You can still show your support by sending flowers directly to the family, or planting a memorial tree in memory of Trevor COOK.
Visit the Tribute Store

Share Your Memory of
Trevor
Upload Your Memory View All Memories
Be the first to upload a memory!
Share A Memory
Send Flowers