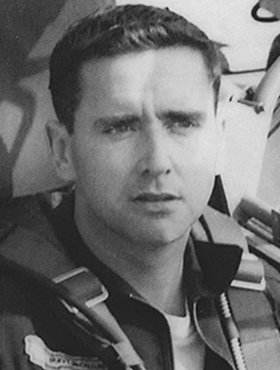 It is with a heavy heart we announce the passing of Duncan Bruce (Duffy) McCallum, beloved husband, father and son.

Duffy grew up on the family farm in Zealandia, SK. In 1959, he graduated from the Rosetown Composite High School. At a very early age Duffy knew he wanted to fly and be a fighter pilot. The day he turned eighteen he signed up to join the Royal Canadian Air Force. In 1961 he earned his wings, graduating at the top of his course. In 1961 Duffy married his friend and sweetheart, Diane V. Reed from Saskatoon, SK. They enjoyed fifty-nine years together and had two beautiful children. Duffy was a skilled pilot and was acknowledged for his hard work and accomplishments, receiving the OMM (Order of Military Merit). He lived an exciting, fulfilling thirty-four year career and had postings which allowed him and his family to live, travel and visit many countries in the world. His most challenging and enjoyable job was the organizing and running of the Canadian Maple Flag training exercises in Cold Lake, AB. Duffy obtained over 7800 flying hours, a majority of these were flying fighter jets.

For thirty-five years Duffy battled Parkinsons disease. He met the challenge as he did with most everything in his life, with courage and a positive attitude. His favourite line when asked how he was doing was “any better I couldn’t stand it”. Duffy was an avid reader and loved playing bridge and cribbage.

The family would like to thank Duffy’s Neurologists, Dr. R. Ranawaya and Dr. J. Sarna for their many years of dedicated, exceptional care and support. They would also like to thank the caring, compassionate doctors and nurses in Unit 94 at Rockyview General Hospital.

At Duffy’s request there will be no funeral service held. Interment will be held at a later date.  If friends so desire, in lieu of flowers, memorial tributes may be made directly to the Parkinson Association of Alberta, 120, 6835 Railway Street S.E., Calgary, AB T2H 2V6 Telephone: (403) 243-9901, www.parkinsonalberta.ca. Condolences, memories and photos may be shared and viewed on Duffy’s obituary at www.McInnisandHolloway.com

“And, while with silent, lifting mind I’ve trod, the high untrespassed
sanctity of space, put out my hand and touched the face of God”.
“Per Adria Ad Adtra” (from adversity to the stars.)

Share Your Memory of
Duncan (Duffy)
Upload Your Memory View All Memories
Be the first to upload a memory!
Share A Memory
Plant a Tree