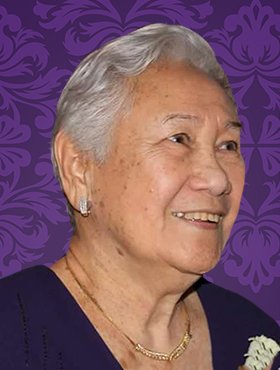 It is with heavy hearts that we announce the passing of our mother, grandmother and great-grandmother, Lolita Alcazar on Friday, September 11, 2020 at the age of 91 years.

She immigrated to Calgary in September 1979 with Victor and her youngest daughter, Dolores, to be reunited with the eldest son Gerry and his family. Eventually, Victor and Lolita were able to bring the rest of the family to Canada with the exception of son, Ruben. After their youngest daughter left the house, they unselfishly legally adopted 4 grandchildren who were living in the Philippines and brought them to Canada to give them a better life. So at the ages of 58 and 65, they once again faced the challenges of raising young children ages 7-12.

They were active members of various seniors clubs in Calgary and together, they enjoyed going to parties, excursions and vacations with these clubs. But family was always the most important for them. They loved spending time with their big family. They enjoyed family trips and cruises.They have gone to Mexico, California, Texas, Virginia, Florida, Montana, Hawaii, British Columbia and the Philippines. Lolita’s last trip was to Hawaii last June to attend her granddaughter’s wedding. Her faith was important to her. She regularly attended Sunday mass at St Mark’s Church. Later in life, she enjoyed a less active lifestyle, saying goodbye to her home of 33 years in Abbeydale and moving into a seniors’ condo where she enjoyed watching daily Catholic mass, game shows and Filipino dramas. She also looked forward to the weekly lunch visits of her family.

She was predeceased by her son, Ruben Alcazar of the Philippines in February 2019 and her beloved husband, Victor in January 2018, whom she was married to for nearly 71 years.

We would like to thank Dr. Desiree Hao and her staff, Dr. Maria Celis, Helen Davies and her home care team for their love, care and compassion shown not only to Mom but to the rest of the family.Thank you for helping us care for her in her own home. She will be greatly missed

A Private Funeral Service will be held. Condolences, memories and photos may be shared and viewed on Lolita’s obituary at www.McInnisandHolloway.com.

Services for Lolita ALCAZAR
There are no events scheduled. You can still show your support by sending flowers directly to the family, or planting a memorial tree in memory of Lolita ALCAZAR.
Visit the Tribute Store

Share Your Memory of
Lolita
Upload Your Memory View All Memories
Be the first to upload a memory!
Share A Memory
Send Flowers