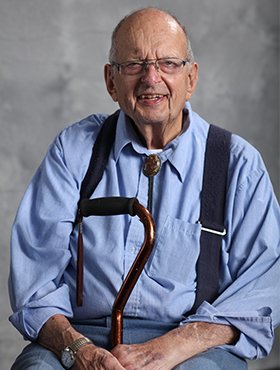 It is with great sadness that we announce the passing of Emanuel (Manny) Cohen on September 29, 2020 at the age of 90.

Manny is survived by his sons, Michael (Lisa) and Geoffrey (Elaine); grandchildren, Melissa, Daniel, Benjamin and Sarah and sister, Annette.

He is predeceased by his parents, Hyman and Mary Cohen; brothers, Samuel and Maurice and his loving wife of 50 years, Donna.

Manny was a devoted husband and father. He was gregarious, caring, and a lifelong volunteer for many causes and associations. Raised in Calgary and Lethbridge, he began working on his family’s ranches near Pincher Creek and the Little Bow. In later years, he became a motel owner and operator in Waterton and Banff National Parks all the while building his career in Calgary as a real estate appraiser.

As a proud member of Calgary’s Jewish Community, he contributed to the Jewish Historical Society and to the “Little Synagogue on the Prairie” project at Heritage Park, spending summers there as docent.  He was also an antique car enthusiast, enjoying many years in car clubs and cruising with Donna in their ’28 Ford Model A, “Old Velcro”.

Manny lived his life to the fullest – enjoying time spent with family and friends, skiing, sailing, flying airplanes, and even taking chef courses. His passion for meeting people and striking up conversations will be missed.

A Graveside Service was held at Beth Tzedec Memorial Park (122 Shalom Way SE, Calgary, AB) on Wednesday, September 30, 2020. Condolences, memories and photos may be shared and viewed on Emanuel’s obituary at www.McInnisandHolloway.com.

Share Your Memory of
Emanuel
Upload Your Memory View All Memories
Be the first to upload a memory!