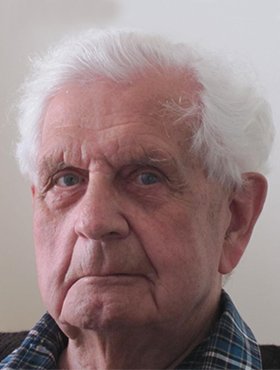 It is with much love and deep sorrow that the family of Harry Johansen announce his passing on Monday, September 28, 2020.

Born in Denmark, Harry was initially trained as a machinist and marine engineer. He sailed on a Danish merchant ship serving Europe, North and South America for a few years. In 1957, the family immigrated to Canada, initially staying in Calgary until he secured permanent employment in Estevan, SK. After briefly living in Vancouver, the family settled permanently in Calgary in 1966. Harry taught for many years at SAIT, enjoying passing on his knowledge to the students. Eventually, he retired from SAIT’s Power Engineering Department, but was often called on to assist with a variety of maintenance issues with the department’s equipment. He had a unique ability to solve various mechanical issues. Harry had a lifelong love of machining and a gift for making things, this resulting in a prolific output when retirement permitted the time. In addition to becoming a neighbourhood maintenance advisor, he created many wonderful gizmos and gadgets throughout his life and joyfully gave them away to his family and acquaintances. As unofficial neighbourhood Grandparents, Kirsten and Harry hosted many gatherings and celebrations through the years and Harry made sure many toys were built and given away. The large marble machines allowed the frequent young visitors to increase the decibel level of gatherings in the house.

Blessed with a wonderful sense of humour, Harry always enjoyed a good laugh or joke with his many friends, often over a beer. He will be sadly missed by all who knew him.

Predeceased by his beloved wife of seventy-one years Kirsten, Harry is survived by his daughter Inge, and his sons, Henrik (Sandra) and Michael (Dorothy); and granddaughter Jamie.

Condolences, memories and photos may be shared and viewed on Harry’s obituary at www.McInnisandHolloway.com.

Services for Harry JOHANSEN
There are no events scheduled. You can still show your support by sending flowers directly to the family, or planting a memorial tree in memory of Harry JOHANSEN.
Visit the Tribute Store

Share Your Memory of
Harry
Upload Your Memory View All Memories
Be the first to upload a memory!
Share A Memory
Send Flowers