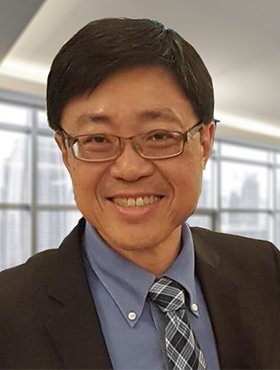 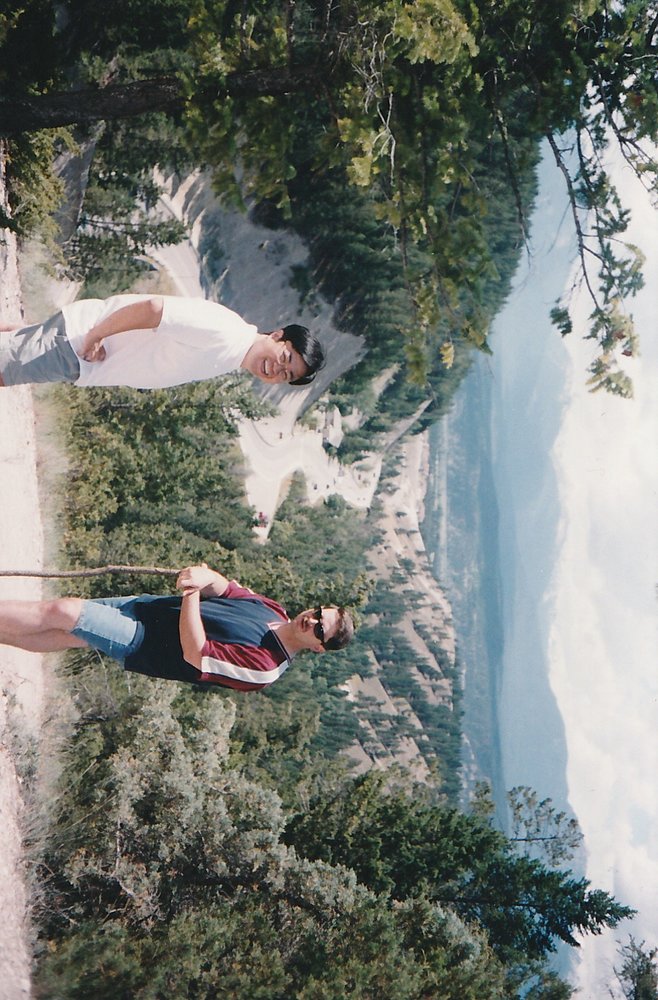 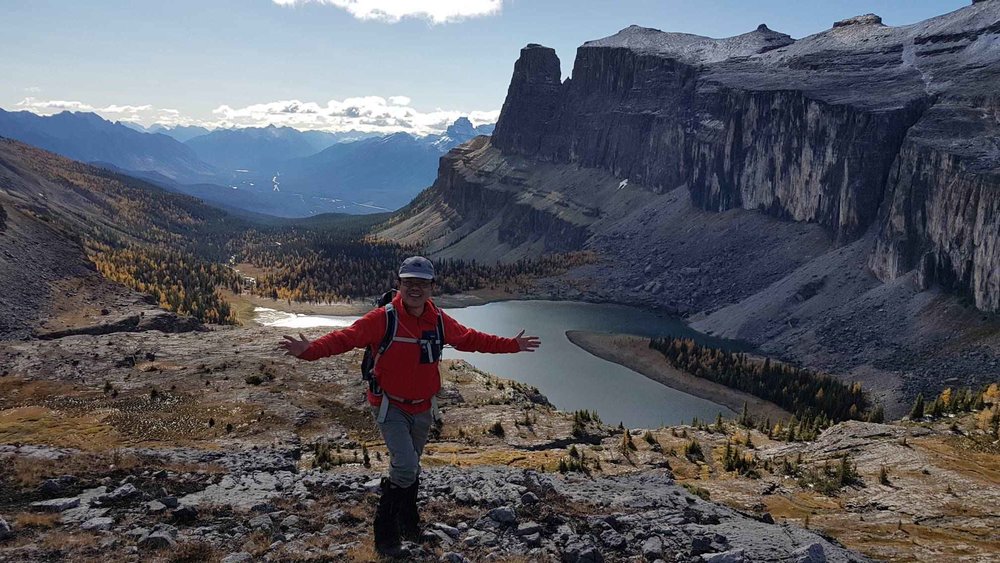 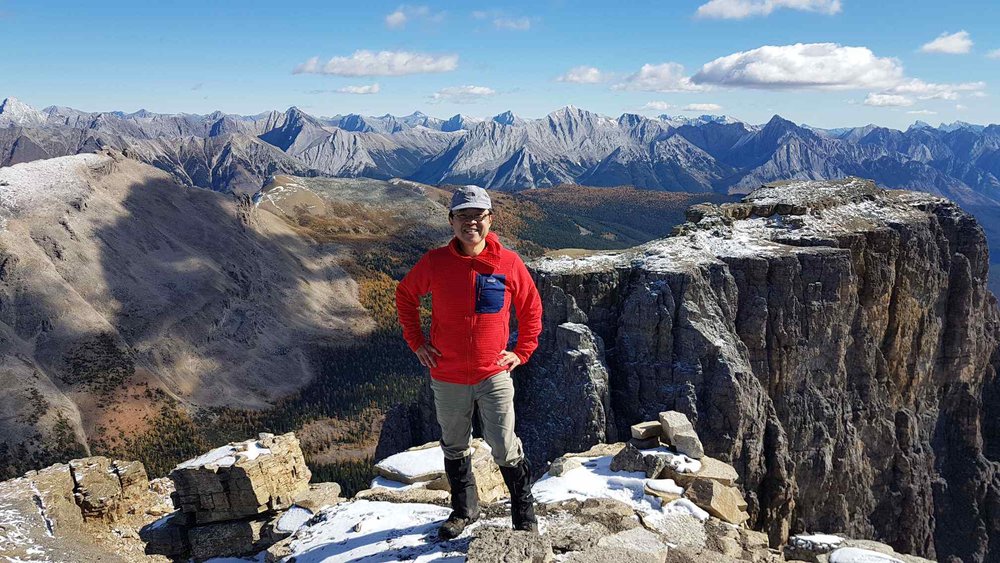 I first met Ken early in my career; it was around 1995. I had just completed my undergrad in Ontario and upon returning to Calgary, I accepted a position with Campus Security at the University of Calgary. I can still see the day in my mind’s eye. I was one of the newest Members of the Security Mountain Bike Unit and Ken was with Parking Services on their bike patrol.

We had met somehow, somewhere on campus, merely by happenstance, but we struck up a conversation and the rest is history. We rode together for hours on campus that day in an area referred to as the ‘Back Forty’ and, needless to say, we

didn’t get much real work done. Many of you know that Ken was once with the Singapore Police; I think this is perhaps one thing that intrigued me about him in the beginning. He never really talked too much about his time with the police though,

and as I got to know Ken, it became clear to me that he was much more than just a former cop.

It was some time later that Ken transferred from Parking Services to the Risk Management portfolio at the University and he was now working directly in the Campus Security office. Ken and I became closer not only as colleagues but also as friends. Ken was responsible for all of the IT requirements for Risk and I was in charge of procuring operational software for Campus Security. It was during this time that I recall the one and only time Ken got frustrated with me, and it probably had a do with my persistence on some issue. Electronic door access and the University One Card was becoming the new security priority on campus and Ken and I were working together regularly, including a few business trips.

The one trip I will always cherish was to Colorado Springs. Sure, it was for work, but it also solidified a friendship that would endure. As everyone who knew Ken knows, he was a connoisseur of everything food and it was probably part of everyone’s relationship with him. After arriving in Colorado and getting our rental car, the very first thing Ken had to do, at 10 o’clock at night; let’s be clear I had no choice in the matter, was to find a steak place. Mission accomplished!

During this trip, we attended a number of technical seminars and product demonstrations, but it was our downtime when we bonded. In fact, Ken and I would reminisce a number of times over the years about the experiences we had on this trip. It was in Colorado where I found my love for musicals. Ken and I attended the renowned Cadet Chapel at the United States Air Force Academy to see the Broadway production, ‘Annie Get Your Gun’. I also learned that we both shared a passion for NFL football. On the Sunday, we went to a bar and watched the Pro Bowl. As you all know, Ken wasn’t much of a drinker. I remember thinking to myself that Ken and I would never be drinking buddies. He had ordered a beer unbelievably, I think he just wanted to make me feel comfortable, but he actually nursed that one beer for the entire four‐hour game, and I don’t think he ever finished it.

Near the end of our trip, we had some time on our hands so we hiked the Garden of the Gods; one of the most beautiful natural reserves in North America. At this point, we still had the rental car with us and we were wondering what else we could see or do without getting in to too much trouble. Finally, we got the bright idea that we would drive up Cheyenne Mountain to see if they would give us a guided tour of NORAD. Well, we arrived at the heavily fortified tunnel opening and were quickly turned away by armed US military personnel.

Ken would move on from the University but our friendship remained constant. Ken, his wife, my first wife and I would socialize from time to time. Ken was actually my confidante after my first marriage ended. You probably already know this, anytime you had a problem or turmoil in your life, Ken would invariably have something profound to say. Some advice or a perspective that made you feel that he truly cared about you. He was the type of person that could connect with you and understand what you were going through at the time. He was a great listener and even better counsel.

Ken was very accomplished at squash. I, on the other hand, played racquetball. This led me to believe that I could certainly beat him at my own game since squash players don’t have to do much running, they just have to be able to reach far enough. Big mistake! Ken was outstanding with a racket in his hand and he knew it. He would never just let you win though, but somehow he could make you feel good about yourself even in defeat. We also played tennis, usually with the same result.

Ken was a very generous person. He would offer to do anything for you and often insisted. I recall a trip to Europe in 2007 with my wife and our family when Ken refused to let us take a cab to the airport. He arrived at our house at 5AM and loaded the 5 of us and all of our luggage in to his van. These were the types of things he would do just out of the kindness of his heart.

Ken also had an interesting system of barter that many of you are probably aware of. Together Ken and I worked on his house doing repairs and renovations. I once repaired his furnace in the dead of winter. I replaced his hot water tank (twice). We hung drywall in his garage. In turn, Ken would give me a laptop computer, or a Sumsung A5, or a Nest Mini or even a Fitbit. Ken would tell me with his infectious smile that he had someone with a skill for all of his needs. Ken bragged about his back deck and the amazing job a friend had done for him. When he showed me his basement development, he was sure to credit another friend for his incredible work. Of course, Ken would never take advantage of you; I just think this was his way of acknowledging his relationships with his good friends.

Ken and I would talk about our mothers; the challenges of aging and their declining health. We talked about siblings and the assumed sharing of responsibilities for parents in their later years. Our mother’s ended up passing away five days apart; it was those conversations beforehand with Ken that gave me peace of mind. I appreciated the fact that we knew how each other was feeling. I have three brothers whom I have varying contact with. Ken would sometimes joke that he and I were brothers from a different mother and he often said that I must be part Chinese because we got along so well. For as long as I have known

his sons they have always called me Uncle, so I guess this somehow confirms that Ken and I were indeed brothers.

Any time Ken and I planned to get together, I would get a feeling of anticipation. I truly looked forward to the time we would spend together and the conversations we would share. When I last spent time with Ken, we sat on his back deck in Scenic Acres enjoying the late afternoon sun from the west and remarking at the beautiful mountain view. We talked about anything and everything.

Ken would often ask me about retirement since I have just a few short months to go. Although he seemed concerned for me and wondered if I would have enough money to retire, I could tell from his questions that he was curious for himself and perhaps wanted to find more time for life and his family.

I spoke with Ken on the phone the Saturday evening before he hiked Castle Mountain, three days before he passed away. He had asked me to join him for the day even though he was concerned that I would find the 32 kilomemtre trip too challenging. Alas, I had to work, so I couldn’t go with him. Sunday, just after completing his hike, Ken texted me some amazing photographs of himself. There is one I will keep with me forever, it’s at Rockbound Lake with a view of the Castle peaks in the background, where Ken has his trademark smile on, his arms wide open, looking as though he was on top of the world.

I used to drive by the CMG building every day on my way to work, and I would think about Ken if only for a fleeting moment. Now when I drive by I remember everything about him and what our friendship meant to me.

Above all else, Ken was a family man. He loved his wife immensely and he was fiercely proud of his sons and all of their accomplishments. Ken was so looking forward to the future with his family.

It is just so tragic about all our lives that we lead. Every day is an ordinary day, but some days, unexpectedly, something completely and totally changes life as we know it and this is one of those moments. I believe that Ken is not really gone if each of us can find a way to remember him. 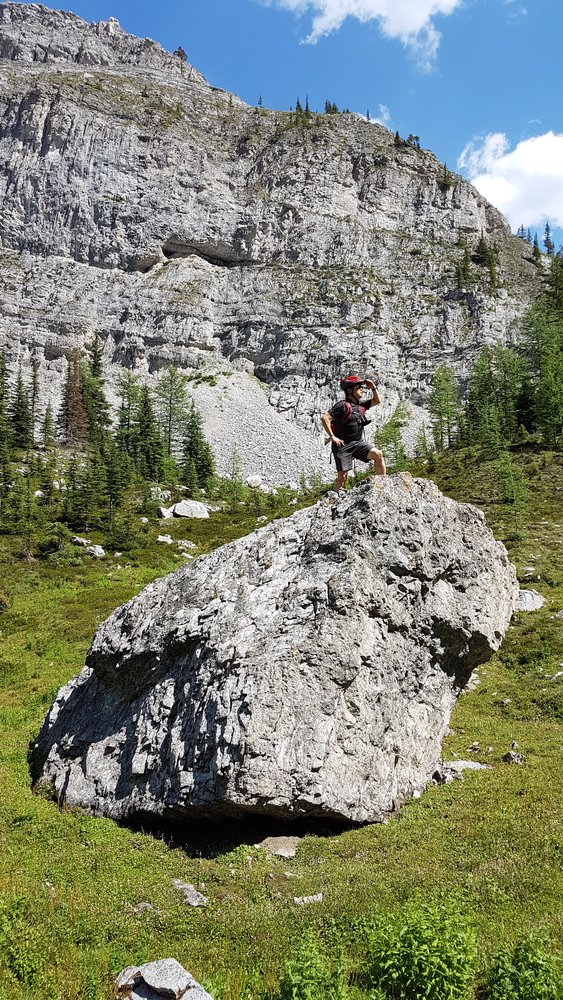 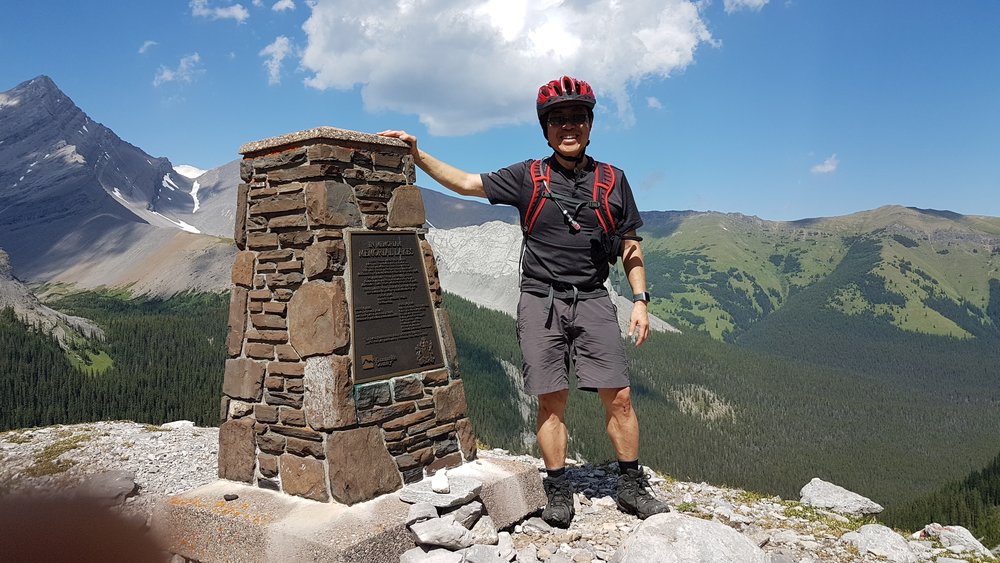 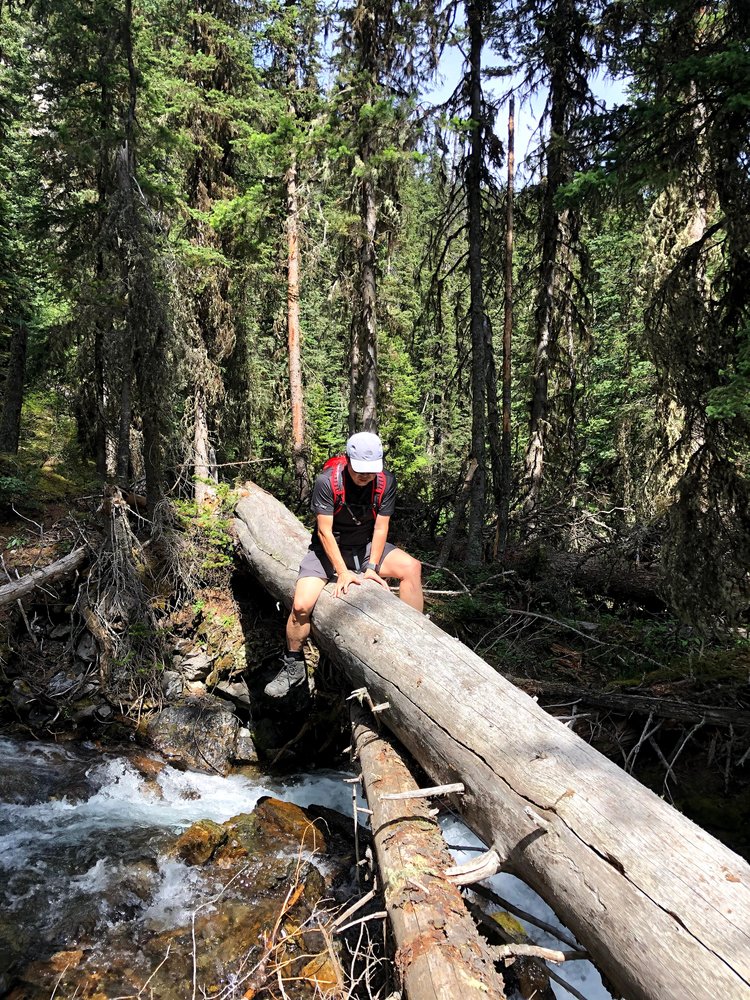 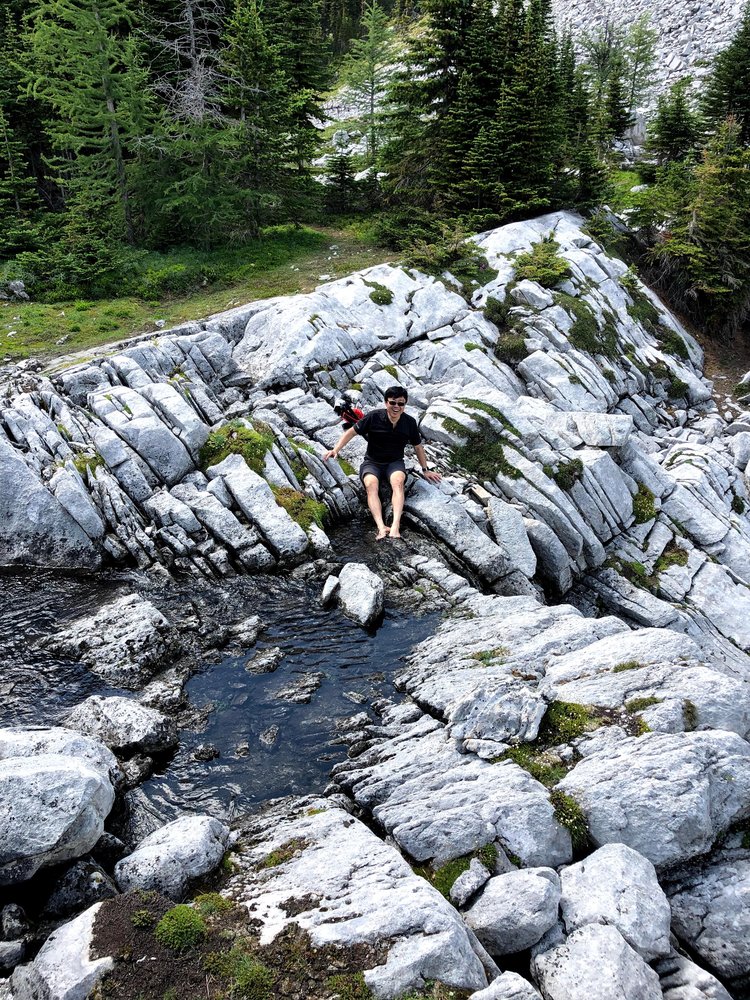 Ken was so full of positive energy and jokes, spending a day with him in the mountains was a day to rejuvenate one's soul. My two favourite hikes of all time were with you my friend, meeting a mama grizzly and doing a Korean pic pose. I'll never forget these memories with you. Just a few weeks ago we were plotting our next adventure and you said to me "I love the spontaneity when hiking with you and all the events we went through" I feel the exact same way my friend, you will be greatly missed. My hugest condolences to your family and many other friends. 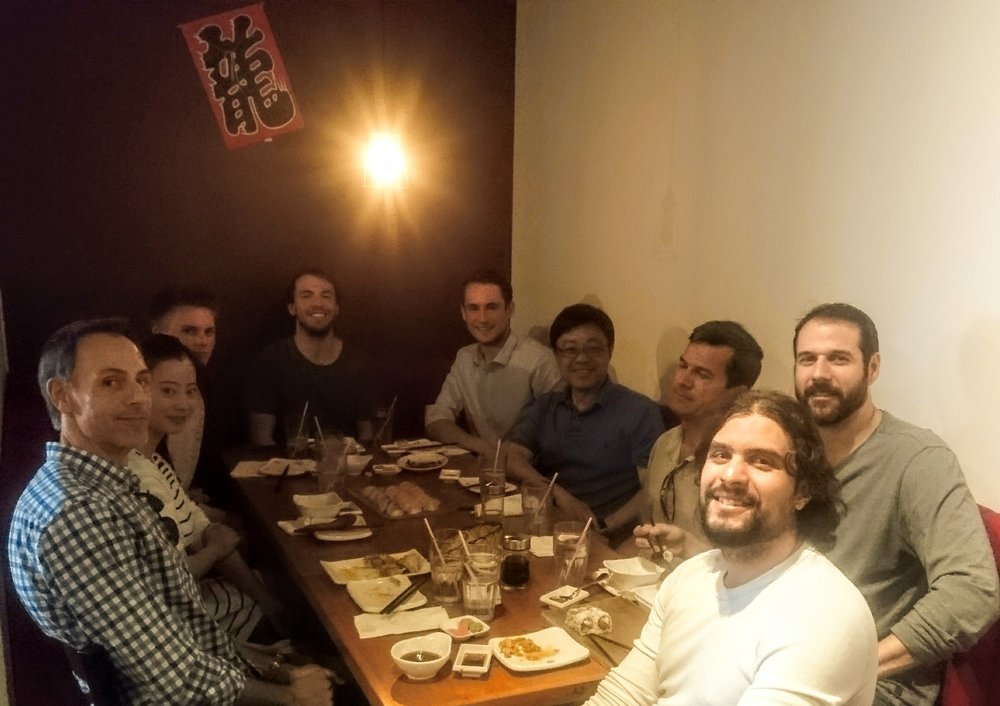 This was a team lunch where we went for sushi. Ken would often discuss ideas for restaurants we should try. 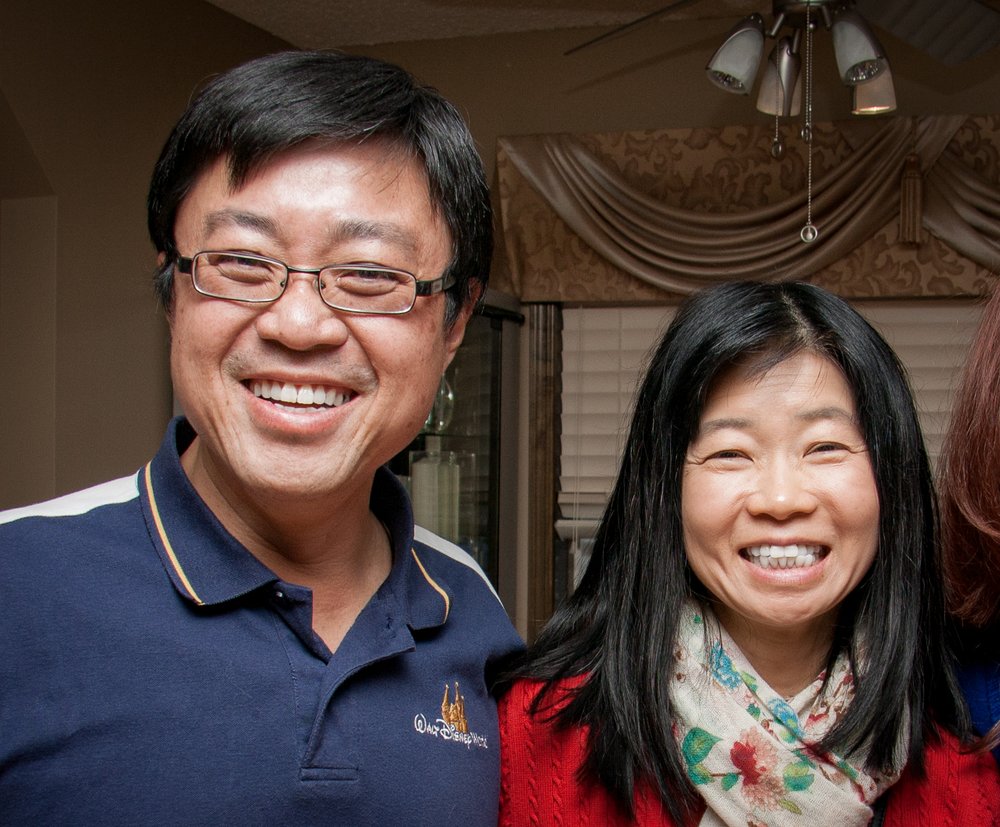 Candi and I are very sad to learn of Ken's passing. I knew Ken through work and only ran into him a handful of times over the years as Candi and I live in a deep south. What I liked most about Ken was that he was so positive but still grounded in his life's experiences. I liked hearing his stories about when he was a policeman in Singapore and I benefited from some of his parenting advice for my then-young children.

Angela, please accept our most sincere condolences for you and your family. I have attached a photograph of you and Ken, which was taken in December 2012 when you and Ken visited our home during the holiday season.

Share Your Memory of
Ken Eng Huat
Upload Your Memory View All Memories
Be the first to upload a memory!
Share A Memory
Send Flowers