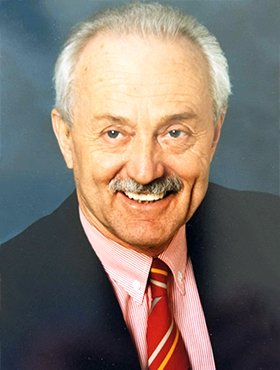 It is with sadness that the family of Nicholas (Nick) Taylor announces his peaceful passing with his loving wife Margaret (Peg) and two of his daughters by his side on Saturday, October 3, 2020 in Calgary, AB, at the Peter Lougheed Center at the age of 92 years.

Nick grew up the eldest of five children on a farm outside Bow Island in Southern Alberta. He traveled to Medicine Hat for High School and went on to the University of Alberta, graduating in 1949 with degrees in geology and mining engineering. Later that year he married the love of his life, Margaret (Peg) Davies, who had emigrated from Wales with her parents just a couple of years earlier. They settled in Calgary where they raised nine children, creating a rewarding life filled with adventure, love and laughter.

Nick worked as a geologist for a variety of oil companies in the 50’s and “went out on his own” in 1960, forming Lochiel Exploration. In its heyday, Lochiel had offices in Calgary, AB, London, UK, Syracuse, NY, Tel Aviv, Cairo, and Istanbul. Nick was a true entrepreneur and tenacious businessman who believed the measure of a person was not in how many times he failed, but in how he learned from his failures and kept on moving forward. These beliefs were tested often over the years as the energy market ebbed and flowed through some trying economic times.

During this time, Nick discovered a passion for politics and found that the liberal party values were closely aligned with his own. He set out in the Federal Liberal Party, running in Calgary Center during the 60’s and lost by a heartbreaking margin to the longtime incumbent for the Conservatives. Heartened by the near win and philosophical as ever, Nick decided Albertans should be able to choose which Liberal Party and liberal philosophy suited them, and went to work building the Alberta Liberal Party, from the remains of the moribund provincial wing of the Federal Liberal Party. He led the Alberta Liberal Party from 1974 to 1988.

As a politician, Nick loved a good debate, rife with quips, quotes and humour. He could take a good ribbing as well as give it, but at the end of the day he always respected his opponents. Various articles referred to him during this time in Alberta politics as the “likable and quotable stalwart” and the “lone voice in the wilderness,” who “held his Liberal caucus meetings in a phone booth.”

Nick was a sitting Alberta MLA for Westlock-Sturgeon and Redwater constituencies from 1986 to 1996. He and Peg moved to Bon Accord, AB, and later to Gibbons, AB, during this time, to continue living where people had shown their support in the polling booths. In 1996, Nick received an offer from then Prime Minister Jean Chrétien to fill a Senate vacancy in Alberta. He accepted and served as a Senator from 1996, until his retirement in 2002, at the age of seventy-five. Nick enjoyed the Senate, and served on several different House committees, making significant contributions in each case; he respected Canada’s parliamentary system, believing in the need for a strong opposition and holding the government accountable.

Upon retirement from the Senate, Nick and Peg moved back to the Calgary area and built a home on Chestermere Lake, where the smaller community lifestyle and lakeside living appealed to them. Nick kept his hand in coaching and advising people involved in local politics, and he continued exploring for oil and gas, revisiting his passion from early days.

As a husband Nick was devoted to his wife Peg, celebrating their seventy-first wedding anniversary together just days before his passing. As a father he was tough and wouldn’t accept his kids aiming for anything less than what they were capable of, and he was fiercely proud of each of them. Nick lived his life with a deep and protective love for all members of his family. He had a strong love of humanity, believing in the inherent good in people, and demonstrated a deep understanding and acceptance of human frailties. He stuck up for the “little guy” and believed everyone deserved a helping hand from time to time.

Nick was predeceased by his beloved children, Catherine Marie (Cayt) McGuire in 2009, and Ian Nicholas in 2004; his parents, Frederick David Taylor in 1973, and Marie Louise (née Ancion) in 1988; and his brothers, Frederick Raymond in 2009, and Lawrence Harvey in 2013.

Nick will be missed by family and friends alike.... he has left his mark on each of us, and we are all a little bit better human beings as a result.

An informative article of Nick Taylor written by a political journalist:
https://daveberta.ca/2020/10/nick-taylor-was-a-giant-in-alberta-politics/?fbclid=IwAR2b9VENh9gKaMrDPKTqC4TUvDMVXkaobfHmWksNLxtVO6II53C8UH7KsHI

Due to Covid restrictions, there will be a small Funeral Mass, by invitation only, on Wednesday, October 14, 2020.  However, the Funeral Mass will be available for viewing on Nick’s Obituary at www.McInnisandHolloway.com following the service. Nick’s family invites friends, family and acquaintances to share their stories and sign the guestbook on this website.  If friends so desire, memorial tributes may be made directly to the Heart & Stroke Foundation of Alberta, 200, 119 – 14th Street N.W., Calgary, AB T2N 1Z6 Telephone: (403) 264-5549, www.heartandstroke.ca.

Share Your Memory of
Nicholas (Nick)
Upload Your Memory View All Memories
Be the first to upload a memory!
Share A Memory
Send Flowers