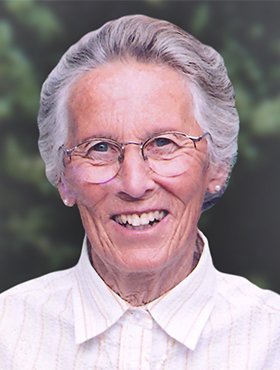 Ann grew up on Mountain Street in Montreal and was a very active child. She once remarked that she never finished a book because sport was always beckoning; baseball, volleyball, sailing and tennis in summer, while skating was a staple in winter. But when she found a pair of skis in the basement, racing downhill became her focus. At eighteen, her goal for her first job as a secretary was to buy skis, clothes and train tickets to Mount St. Sauveur where she joined the Penguin Ski Racing Club.

During the war years, Ann’s natural shyness slowly gave way to a confident young lady whose dance card was always full. But soon that card was filled with one name; Graham Gammell’s charm and his ability to keep up on skis at St. Sauveur, where Ann then worked, led to marriage vows in 1949.

Very soon they moved to “the mud streets” of Leduc, AB. Ann would laugh at her family’s reaction to this, "Poor Ann” they’d say. But she loved Alberta. As they embarked on moves between Edmonton and Calgary the family kept getting bigger and their life-long friendships with Imperial Oil families and the Banff / Lake Louise ski crowd got deeper. Yet in 1962 they moved to Toronto and then to Montreal. There, Ann rekindled her love for racing sail boats and spending time with extended family every summer in Kamouraska, QC.

In 1972, the family made one last move back to sunny Calgary and her first country living experience near Okotoks. There she was thrilled to re-ignite yet another passion for horses. From Ann’s perspective it was the perfect place to raise a family with a deep connection for a healthy active outdoor lifestyle.

Ann also dedicated twenty years of volunteerism to Birthright and eventually became President. She was an active Drop-In Centre Board Member for thirteen years of phenomenal expansion. But her most cherished role was as the founder of the Strathcona Tweedsmuir School Gammell Essay Contest in 1977. As a long-time parent and support of STS, she kept the content going for forty-three years and loved every minute of it.

The family wishes to extend a special thanks to Ann’s son, Bruce, who spent the past years patiently helping her transition comfortably through to the end.

No service will be held immediately, with a Celebration of Ann’s Life to be arranged in the future. Condolences, memories and photos may be shared and viewed on Ann’s obituary at www.McInnisandHolloway.com.

Share Your Memory of
Ann
Upload Your Memory View All Memories
Be the first to upload a memory!
Share A Memory
Send Flowers