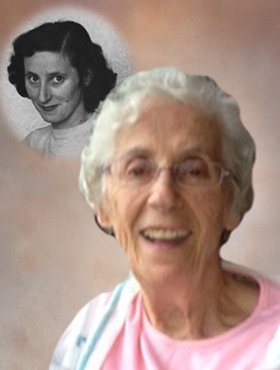 Cait was born in Dublin, Ireland on December 12, 1921. She married Frank (William) McGlynn in 1949 and immigrated to Canada to join her husband in 1954 where they settled in Toronto. In 1988, Cait and Frank visited the Calgary Olympics where they enjoyed both Calgary and the Rocky Mountains. They enjoyed it so much that, in 1989, they returned to make Calgary their permanent home. Cait was a member of the Catholic Women's League, was an avid crossword enthusiast, and enjoyed hiking with the Second Sixties. Above all, Cait enjoyed caring for her family.

A Private  Family Service will be held. Condolences, memories and photos may be shared and viewed on Cait’s obituary at www.McInnisandHolloway.com. In lieu of flowers, if friends so desire, memorial tributes may be made on behalf of Cait directly to The Alzheimer Society or to the Heart & Stroke Foundation.

Special thanks to Dr. John S. Haggblad, MD, CCFP. PC, the nurses and caregivers of Unit 71 at RVGH for their loving and compassionate care shown to Cait and family.

Share Your Memory of
Kathleen (Cait)
Upload Your Memory View All Memories
Be the first to upload a memory!
Share A Memory