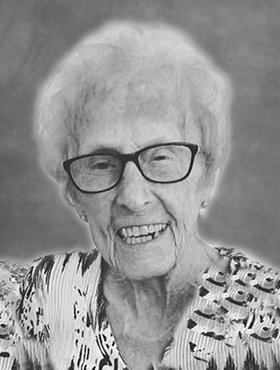 Loretta Dickinson of Calgary, AB, passed away on Wednesday, January 6, 2021 at the age of 88 years. With the heaviest of hearts we’ve had to say goodbye to our Grand Matriarch, Mom, Grandmother, Great Grandmother, Sister and Aunt.

Loretta was born in Bellevue, AB (Crowsnest Pass), the only daughter to parents Hubert and Gustave Mattson. As Loretta spent her youth in “The Pass” the Crowsnest area was always her special place.

Loretta eventually moved to Calgary living with her grandparents and cared for them as they aged. They were very close and after their passing, she spoke of them often and dearly.

As time went by Loretta worked mainly as an administrative assistant in Calgary, initially for General Electric and then with the city of Calgary Electrical Department. She was the model employee, hardworking and a near perfect attendance record.

Loretta lived in the community of Haysboro in the same house for nearly sixty years. She loved her home and took great pride and pleasure maintaining it. Her yard was her greatest pleasure as it was always immaculate and she could often be seen down on her hands and knees edging her lawn or tending to her flower beds. It wasn’t out of the ordinary to see her shoveling her walks and moving on to the neighbours’ walks prior to going to work. She just loved to putter and keep busy.

After her retirement Loretta decided it was time to spend more quality time with her grandchildren. In Calgary, Loretta took passion in helping to raise Calvin and Caitlin as they were close by. She left an indelible impression on them both. She traveled to Kauai with them and took great pride in supporting them by attending many school events, music concerts and sporting activities. Loretta was in her glory at the hockey arena however as she loved to watch her grandchildren compete. Everyone knew her at the rink as she was, let’s say, one of the more vocal spectators in attendance and she never had a problem letting a referee know that they should “open their eyes”. Loretta loved her hockey, never missing a Flames game on television.

Loretta would often jump in her car and head down to “The Pass” to spend time with her other grandchildren, Crystal and Jarret, her son Lloyd (Wendy) and her younger brother Blythe. She cherished her trips there and always found it difficult to head back to Calgary after a visit. She loved them all very much.

Loretta’s other passion were her dogs, she had a number of dogs over her lifetime and because she had trouble with names she decided to call them all “Lady” except for her last one which we convinced her to call Bella to change things up. Bella has come to stay with Wendy and Kevin now and she is struggling as she misses Gram as much as we do. Time will heal.

After cremation Loretta’s remains will be scattered near the same location as her fathers in “The Pass”.

We will love you and will think of you daily Gram. Thank you for being you, your wit, sense of humour, and loving devotion will be with us all forever.

“When we come into this world, we cry and everyone rejoices, when we leave this world, everyone cries but we rejoice.” – Unknown

At Loretta’s request, no formal funeral will be held as one of her famous sayings were “If people won’t come and see me when I’m alive, why would I want them to come and see me when I’m gone!” Condolences, memories and photos may be shared and viewed on Loretta’s obituary at www.McInnisandHolloway.com.  If friends so desire, memorial tributes may be made directly to the Calgary Police Youth Foundation as Loretta was so proud to have a member of the Calgary Police Service in her family.

Share Your Memory of
Loretta
Upload Your Memory View All Memories
Be the first to upload a memory!
Share A Memory
Send Flowers