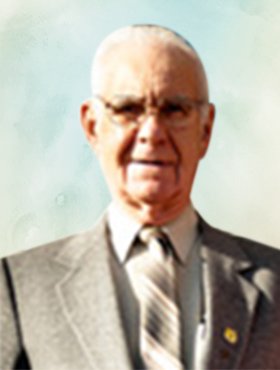 Jim was born in High Prairie, AB on November 23, 1926 and lived on the family farmstead 25 miles south of High Prairie.

Jim started his career with Alberta Pacific Grain in 1949. Jim was a Labourer, Foreman and Construction Superintendent responsible for the building of Grain Elevators across the prairies. He visited many hamlets throughout Alberta that often existed because of the elevators.

Jim met Lorraine and they married in High River, AB in 1952.

Jim and Lorraine bought a travel trailer so their growing family could travel with Jim to various hamlets around Alberta for his work. Once the children were of school age, they settled in Blackie, AB.

Jim was transferred to Winnipeg, along with his family in 1966, when Federal, Searle and Alberta Pacific Grain amalgamated into Alberta Wheat Pool. They moved back to Calgary in 1972 where they have resided since. Jim retired from his career in 1992.

Jim was an avid sports fan for both the Calgary Flames and Calgary Stampeders, although he would watch any sport he could. He enjoyed curling, baseball and golfing for many years. Jim also enjoyed visiting family in Grande Prairie, and was very proud of his western heritage.

Jim is survived by his daughter Betty Coneybeare. He is also survived by three sons and daughters-in law, David and Lori, Gerry and Deborah and Ken and Cindy.  Jim loved spending time with his fifteen grandchildren and nine great-grandchildren..

Jim was predeceased by his wife Lorraine in 2015; and by his parents, Elizabeth and Merton Williscroft.

Funeral Services will be held at McINNIS & HOLLOWAY (Fish Creek, 14441 Bannister Road SE, Calgary) on Friday, June 3, 2022 at 2:00 p.m. Reception to follow in the Hospitality Centre at the funeral home.  Condolences, memories and photos may be shared and viewed here.