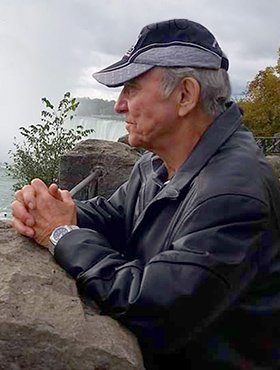 If friends so desire, memorial tributes may be made to your local Veterans Food Bank, or directly to the Veterans Food Bank of Calgary, 4619 6 St NE #1, Calgary, AB T2E 3Z6, Telephone: (403) 277-8387 https://theveteransfoodbankofcalgary.ca/

Bramuel Douglas Anthony McMillan passed from this earth into Everlasting Glory, at 11:29 A.M. on Wednesday, March 10, 2021.

After leaving his birthplace of Swan River, MB, Doug joined the II Batallion Queen's Own Rifles of Canada, where he served for four and a half years. He then continued on to serve as an apprentice welder with Atco, Flextrac Nodwell, Exchanger Sales and Service, where he received his Pressure B Ticket. He then joined IP Constructors, which later became Kaverner, and served with them for seventeen years as a Superintendent, and Project Manager. In 1999, Doug left for Poland for ten months as a Level Three Inspector on a gas plant being built there. He was a fiercely loyal employee, who always strove to improve his abilities, and help the crews under his leadership.

After retirement, Doug was involved in Alpha Bible Studies, and acted as a Facilitator for several years in the bible studies. He was considered a positive influence to those who attended, and made many friends during his time with the groups. The following passage describes him perfectly. From II Timothy 4:7 "I have fought the good fight; I have finished the race; I have kept the faith."

Besides his loving wife of fifty-six years Helena McMillan, Doug is survived by his son Jim McMillan, daughter Jacquie Schikosky, son-in-law and true friend Terry Schikosky, as well as the lights of his life, his grandsons, Dallas and Austin Schikosky. He is also survived by his sister Joan McMillan, and brother Howard Gaudry, as well as numerous nieces and nephews, who loved him because of his dry wit, loving hugs, and wisdom.

Due to Covid, we will be announcing a date for Doug's Memorial at a later time, when more of his family can gather for a Celebration of his life. Condolences, memories, and photos may be shared and viewed on Doug’s obituary at www.McInnisandHolloway.com. If friends so desire, memorial tributes may be made to your local Veterans Food Bank, or directly to the Veterans Food Bank of Calgary, 4619 6 St NE #1, Calgary, AB T2E 3Z6, Telephone: (403) 277-8387 https://theveteransfoodbankofcalgary.ca/

Our deepest gratitude to Les and Dawn Bon Bernard for praying with us and over Doug, as he left us on his way to Paradise. He will no longer suffer any pain, but enjoy Peace and the loving warmth of our Savior Jesus Christ. We wish to express our gratitude to his Doctors, Dr. John Mah, Maruve', Daigle, MacBeth, and Alvarez. As well, our deepest thanks for the care of all the nursing staff on unit 68 and the ICU at South Calgary Health Campus.

Share Your Memory of
Bramuel
Upload Your Memory View All Memories
Be the first to upload a memory!