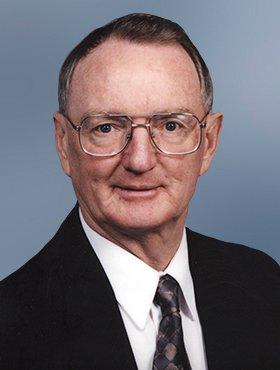 A few weeks short of his 92nd birthday, and surrounded by family, Vince O’Connor took his final leave and retired peacefully to join his beloved Dene.

He was born in Calgary in 1929 (often saying he brought on the Depression) and lived his entire life in the city. He attended St Mary’s Boys School, then completed an accelerated Arts/Law degree at U of A and was admitted to the Alberta Bar at the ripe old age of 23, after articling to his father Henry Vincent Sr.

With a law practice established in his father’s firm, Vince’s attentions were taken by other interests. His sister Maureen was attending nursing school at the Holy Cross Hospital and introduced him to a classmate of hers, who instantly and permanently stole his heart. Vince and Dene were married in 1957 and welcomed five children in the coming years. These years were extremely busy with raising a family (highland dancing, school, Young Canadians, Boys Choir) career, military and community service.

Family was paramount to Vince. His existence was intimately intertwined with his people. First, his immediate family and next his large extended family. From Chestermere Lake, to the family Christmas party, weddings, golf, wine parties, spontaneous backyard barbecues, Vince could find any excuse for a gathering. He became the patriarch of the clan and always emphasized the importance of family at every opportunity during heart-to-heart conversations at the many family gatherings.

Vince learned to play the piano by ear at an early age and gathered people for singsongs throughout his life – first at his parent’s home, then during his university years, in his own home over many decades, and even at the Manors in later years. We knew he was on a roll when he launched into Glen Whorple – singing enthusiastically about whisky-suppin’, hairy-legged Heilan’ men.

His faith, community service and profession were also fundamental components of the man. A short list of his involvement would include:

-  Apostolic Trustee for the Franciscans of Western Canada for 35 years (Pro Bono). Advisor and counsellor to Sisters Faithful Companions of Jesus and Sisters Announcers of the Lord (Pro Bono). Active volunteer and member in St. Mary’s and Holy Spirit parishes for most of his life. Volunteer contribution to numerous boards and associations and to the City of Calgary Court of Revision and Assessment Review Board.

- Calgary Highlanders – joined as officer cadet and rose through the ranks over many years to retire as Lieutenant Colonel and Commanding Officer in 1970.

- Legal Profession – Private practice of law and service to the profession for 60 years with discipline, precision and unquestionable ethics and integrity. He practiced in his own firm for many years and subsequently with Code Hunter, finishing his career with Gowlings and received his 60 year practice certificate from the Law Society of Alberta in 2012.

All who knew him understood Vince lived his values with gratitude daily and there was never a doubt as to where he stood on any matter.  Yet, he was a true gentleman in every sense of the word.   In his final days, whenever anyone asked how he was doing, the rousing reply was always, “Not bad for the shape I’m in!”

Vince’s family would like to thank the staff at the Rockyview General Hospital and CareWest Glenmore and especially those at the Manor Village at Garrison Woods for providing a welcoming home and community to Vince in the 10+ years he was a resident there. In lieu of flowers, donations can be made to the Universal Rehabilitation Service Agency (URSA) www.ursa-rehab.com in his name.

Share Your Memory of
Vince
Upload Your Memory View All Memories
Be the first to upload a memory!
Share A Memory
Send Flowers