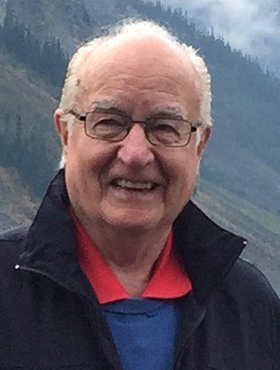 Michael Bolger, beloved husband of Dawn Bolger (nee Mackintosh) of Calgary, AB, passed away on Thursday, April 29, 2021 at the age of 80 years.

Born in Birmingham, England, Mike studied history and started teaching in Liverpool. A Beatles fan forever. Family meant everything to Mike, and he was blessed to have found true love not once, but twice in his lifetime, with two wonderful women.  From his two marriages he had the good fortune of having four children, each of whom was his pride and joy.

In 1964 he planned a world tour. However, his plans quickly changed after meeting Anne Humphreys.  They travelled to Calgary in 1965 and were married in February 1966.  Mike and Anne established family roots in Calgary with the births of their two sons, Stephen and Paul; they enjoyed many happy adventures together until Anne was sadly taken from us by cancer.

He married Dawn in 1985 and they had over thirty-five happy years together.  They were blessed with two children, Amanda, and Mark.  Mike thrived in the opportunity to have a second phase of his life and added many more unforgettable memories throughout these years, while Stephen and Paul also increased the family with five grandchildren for Taed and Grandma to spoil. Mike was always there as quiet support for Dawn and her interests. He was a wonderful man with broad interests and a fantastic memory.  No need for Google when Mike was around! A game of Trivial Pursuit was always a humbling experience for his opponents.  His extensive library included books, records, VHS, CDs and DVDs, crossword puzzles and sudoku!

His children and grandchildren will miss his support and presence at music performances, sports events, and birthdays. He always put other people before himself. A lifelong Christian, Mike believed in the power of prayer and every night, in the dark, would pray for family, friends and the world. He tipped generously, and donated to many charities like the Food Bank. He was a true friend. His Canadian friendship group of over fifty years will miss him.

He will be greatly missed by his wife Dawn, four children, Stephen (Jasmine), Paul (Patricia), Amanda, and Mark; five much loved grandchildren, Olivia, Theo, McKenna, Nolan, and Quaid. He will be also be remembered by his sisters and their families in England and relatives in Wales. Those family connections were important to him.

The Private Funeral Service scheduled for Friday, May 7, 2021 at 2:30 p.m. has been postponed due to Covid-19 restrictions. A service will be announced at a later date when it is safe to gather. Condolences, memories and photos may be shared and viewed on Michael’s obituary at www.McInnisandHolloway.com.

Thank you for joining us for the live-streaming of this event.

Our technical team does everything possible to ensure the best quality of the live-stream service.  Unfortunately there are times when the internet connection at the venue or where you are viewing from may cause interference and buffering.