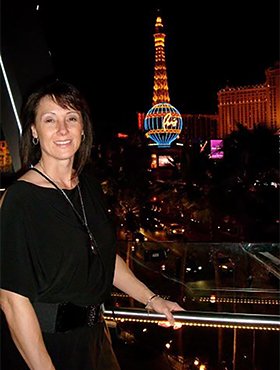 Sonia Maria Bell passed away peacefully surrounded by family on Wednesday, May 12th, 2021 at the age of 49 years.

Sonia was born on April 29th, 1972 in Burnaby, BC to her mother Rigmor Merally. As Rigmor once took care of Sonia, Sonia cared for her mother before she passed away in December 2016 with Sonia at her side.

Sonia’s greatest joy was her son Devin. She was a devoted mother and always strived to provide him with every opportunity. She was very proud of the young man he has become, but she always thought of him as her little boy. Sonia was a very strong, self-motivated person which helped her excel in both her personal and professional goals. She started bodybuilding at a young age and enjoyed both competing and attending many bodybuilding shows. She also began applying her attained knowledge by training both friends and clients. She was always proud of everyone for not only placement in the competition, but the hard work and effort they applied. She simply enjoyed helping. From a young age, Sonia had pets. She always had a very strong desire to rescue her pets as she always wanted to provide a safe and loving home for an animal in need. She treated all her pets as if they were her kids. She was an incredibly kind, loving person, and she will be greatly missed.

Sonia met the love of her life, Steve, in June 2001, and they were engaged three months later. Sonia and Steve took many vacations together to Mexico and on various cruises. Her favorite trip was to the Caribbean with Steve and his parents, Diane and Bill.

Condolences, memories and photos may be shared and viewed on Sonia’s obituary at www.McInnisandHolloway.com.

Share Your Memory of
Sonia
Upload Your Memory View All Memories
Be the first to upload a memory!
Share A Memory
Send Flowers